Is Uber banned in Denmark? Is Uber available in Denmark or not?

I know they used to be in Copenhagen but they got banned, right?

Technically not banned. Back in business but with loose ends.

Uber had been operating in Denmark for 2.5~3 years until they decided to shut down and pull out in April of 2017. This was due to a court ruling a few months prior that put new taxi laws and regulations in place.

The courts ruled Uber drivers to be operating as taxis and that they must be under strict regulations previously only enforced on taxis, such as having taxi meters, video surveillance, and seat sensors. Any drivers who were not following these rules had to pay penalties and fines set forth by the government.  These changes also affected tax consequences and fees that drivers owed the authorities...all over night.

The four taxi drivers, one of whom was fined 486,500 Danish crowns ($78,060), were charged with failing to have permits and for violating a law introduced to combat Uber which imposed extra rules on taxis operating in Denmark.

After launching its service in Denmark in 2014, Uber Technologies Inc [UBER.UL] was criticized by taxi driver unions, companies and politicians who said the company posed unfair competition by not meeting legal standards required for established taxi firms. (source)

So basically, Uber is not technically banned by Denmark or Copenhagen, but it was deemed as illegally operating their business, and their drivers were charged hefty fines. (Uber had publicly commented that it will pay any fines and supports its drivers.) As drivers all ceased driving for Uber, the company was forced to shut down its operations. 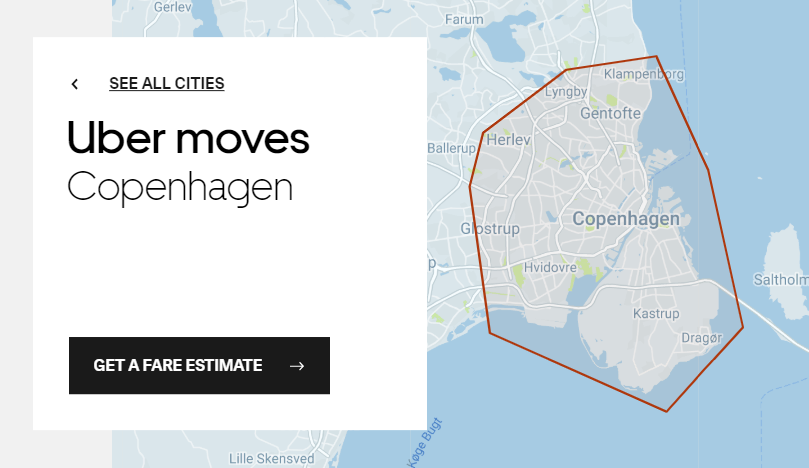 According to their website, Uber seems to still provide service in Copenhagen (https://www.uber.com/cities/copenhagen/); however, as this news article states, the rulings and the new laws are still in place, and there are too many uncertainties for the drivers and Uber to be operating.