Another Air-Taxi Prototype was just Debuted at CES 2020

Flying Cars. Air-Taxis. Vehicle Automation. This is where the world is heading and it is only a matter of time before these prototypes become reality.

Hyundai Motor group and Uber are one step closer to getting passengers in flying cars with their newest Hyundai Urban Air Mobility (S-A1) concept.  This newest concept is an air taxi prototype designed specifically with Uber Elevate’s initiative in mind. The design was just debuted at CES 2020 this week.

The S-A1 is a more compact aircraft than past prototypes that we have seen but can still fit 5 people (4 passengers plus 1 pilot). As you can see in the image below, the aircraft contains four electrically driven props in a vertical orientation, which allows the S-A1 to easily maneuver vertical take-offs and landings. 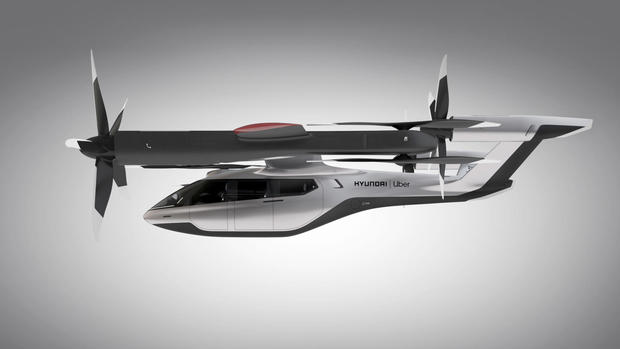 Once the craft reaches cruising altitude, the props tilt to face forward, converting the aircraft to a more traditional airplane configuration. This allows the S-A1 to travel faster, reaching speeds of up to 200 MPH. In other words, you could travel from San Francisco to San Jose in only 20 minutes! Once the aircraft has reached its destination, the S-A1 will transform back to its original formation to allow for a smooth and vertical landing.

According to Hyundai, the aircraft will only need about 5 to 7 minutes between trips for recharging and has a flight time of up to 60 minutes.

Uber has announced a goal of flight demonstrations in 2020, with Elevate planned for commercial availability to riders in 2023.