The Story Behind Uber: How Uber Started 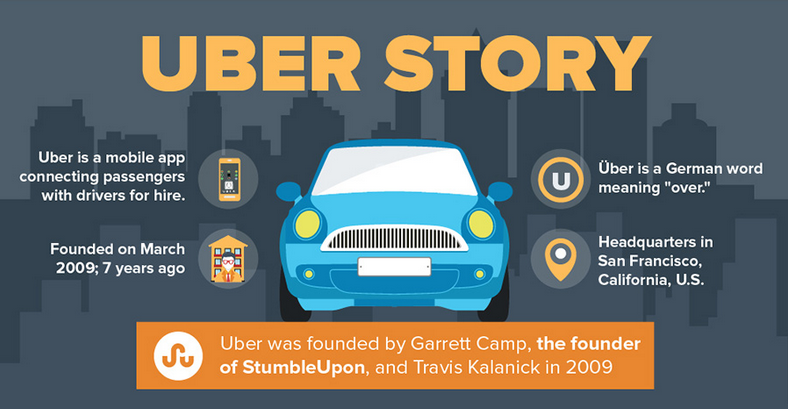 Uber. We all love it and rely on it. If nothing else, it is a groundbreaking and revolutionary concept that has made life easier for a lot of people. It has become a brand name recognizable around the world in only a few short years. How did Uber get to where it is now? Check out our top 7 key facts about Uber's origin.

When did Uber start?

Uber officially got its start in March, 2009 in San Francisco California. Uber wasn’t always called Uber, though. The beta was launched as UberCab in 2011. The price was higher than a cab ride, but the cars were originally black luxury cars. The company shortened its name to just Uber shortly after launching in 2011 because cab drivers kept complaining about the confusion. In 2012, Uber expanded to Chicago and allowed people to hail regular cars instead of the black luxury cars of San Francisco.

Garrett Camp and Travis Kalanick co-founded Uber. Camp came up with the idea after hiring an expensive private car for New Year’s Eve. Camp and Kalanick were not new to creating. Camp was a co-founder of StumbleUpon, which was founded in 2001 but is now defunct. Kalanick sold his startup Red Swoosh in 2009 for a "mere $19 million". These two came together to found Uber.

Absolutely. When Camp and Kalanick came up with the idea, they invested $200,000 for seed money and quickly picked up $1.25 million more by 2010. Today, they have raised over $24.2 billion through more than a dozen rounds with private equity firms and venture capitalists. Toyota, Softbank, and Public Investment Fund of Saudi Arabia have invested considerable capital in the company.

Who was UberCab’s first employee?

Fun story. Ryan Graves became the first employee of Uber by responding to a tweet from Travis Kalanick. He ended up receiving between 5-10% of the company. Graves became CEO but stepped down to become the COO.

Where does Uber operate?

Uber started in one West Coast city in 2011. Seven years later, they are operating on all continents except Antarctica. Drivers are helping people get around in 300 countries today.

Uber grossed over $20 billion in 2016, but the company lost $2.8 billion because they were putting money into research to continue pushing the envelope on what can be done. UberEats today, what will tomorrow bring?

Technically, the Uber logo has changed four times. 2010 saw the original logo of UberCab, but quickly changed when the company became Uber. In 2012, the logo went under changes to the most familiar logo. 2016 saw huge changes to the familiar logo and saw some criticism for being unrecognizable.