Who is benefiting from PPZ, The Driver, The Passenger, or Lyft?

Since I started driving for Uber and Lyft, which is more than three years now, I've seen the GOOD, THE BAD & THE UGLY!

The GOOD was when I first started, high pay for miles and minutes, plenty of surge fares, less than eight drivers at every corner, medallion system that pretty much guaranteed a 2x surge multiplier on each ride, Power/Boost zones, and high value quests for weekdays and weekends.

The BAD was what followed next, constant price cuts on both Uber and Lyft platforms in a bitter race to the bottom. Both companies decided to underprice and subsidize every ride, losing billions of dollars every year with a “growth at all cost attitude”. During this time, however, they did throw their drivers a bone by creating high value Power/Boost Zones, juicy quests, PDB (Power Driver Bonus) etc.

Finally, the UGLY reared its head a couple of months ago! Uber decided to cut rates to a whopping 60 cents a mile and 21 cents a minute in Los Angeles, while Lyft kept steady at 80 cents a mile and 12 cents a minute. Since their respective IPOs, they have been reducing quests and streak bonuses to laughable levels. Although in Los Angeles there is still surge pricing for Uber, Lyft took on a new initiative and phased in something called PPZ (Personal Power Zones) by getting rid of PT (Prime Time). As of June 3, all drivers were subject to PPZ. The following was the email I received from Lyft explaining what PPZ was. 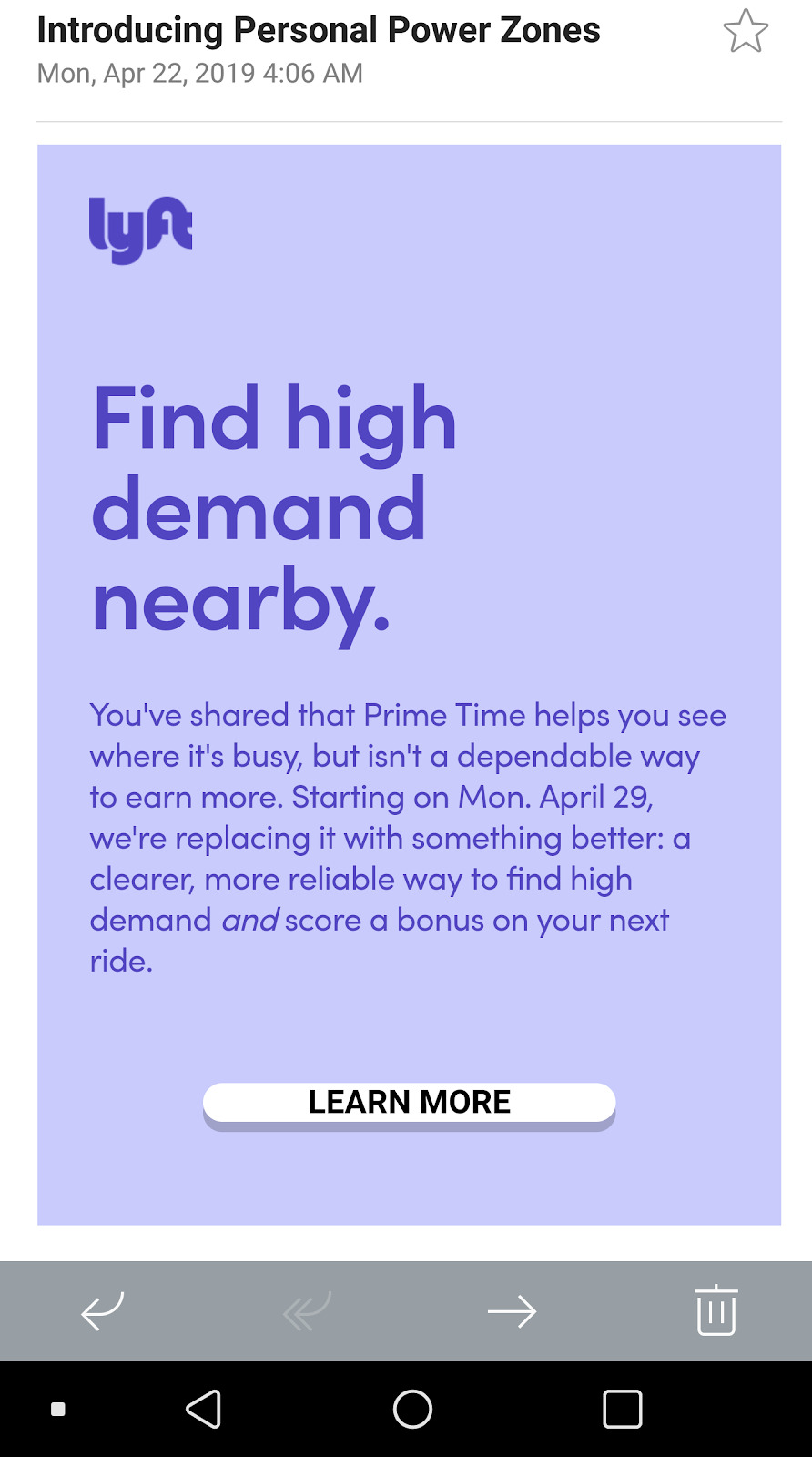 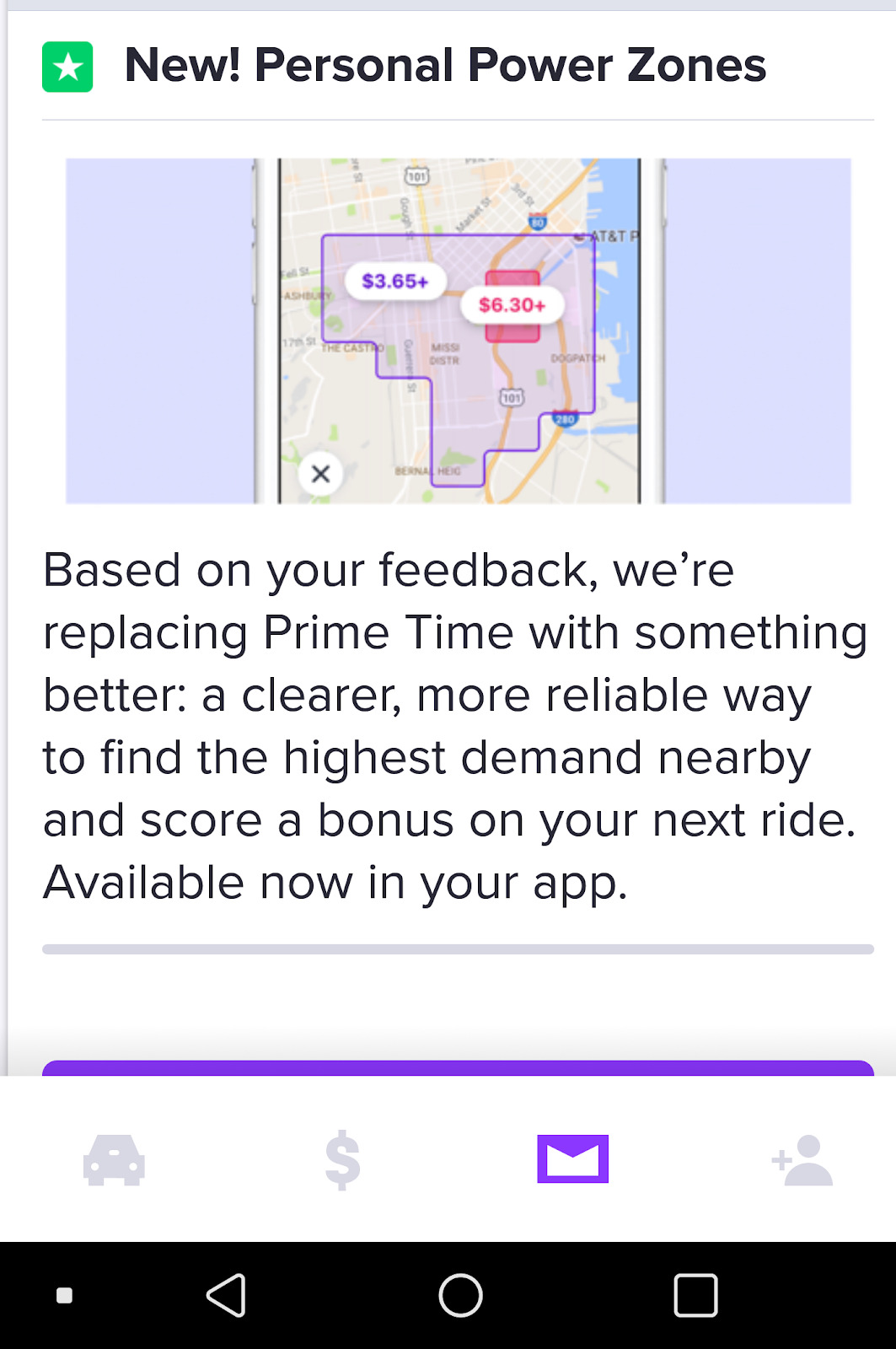 As if the Lyft algorithms are not enough to decide who gets what ride, now Lyft wants to control who gets what bonus and when. Regarding the email on the left, I was always able to find high demand, not a problem, just position myself in the expected PT zones and here comes a 100% Prime Time ride. As far as the email on the right, I swear, I have never given Lyft any feedback in regards to being unhappy with PT (Prime Time). I don't know whose feedback that was but I can assure you it was none of the drivers in Los Angeles or any other major city like San Francisco, New York, etc. Maybe it was in a rural town in Iowa with 200 passengers where every pick up is 10 miles and a half hour away.

Reliable earnings is up to our individual skills as IC (Independent Contractors). Not everyone is supposed to earn the same amount, like in every other business, some people excel, most are average, and some people will fail. With this move they are taking away our individuality and are equalizing the playing field. Is it an attempt to cover up how horrible earnings are for rideshare drivers? Is it an attempt to purge veteran drivers who put in the time to study their markets and earn almost twice as much as an average driver? If that is Lyft’s desire, they should make us employees and pay us all the same. 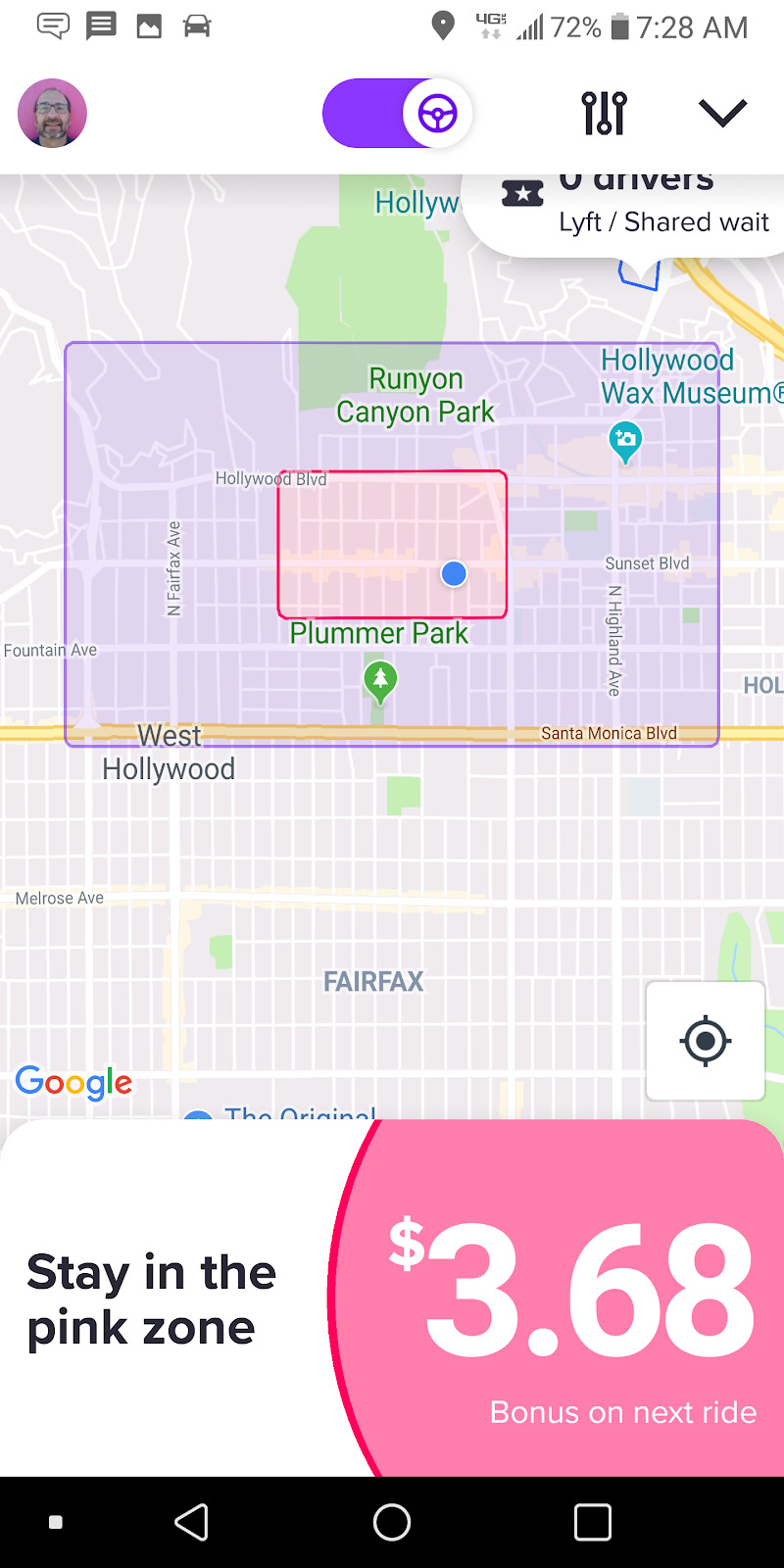 In my opinion, Personal Power Zones are definitely not better than PT or more reliable since Lyft controls who gets what and when. What driver will pick $2.73 bonus over that 150% PT ride? However, after my initial research, I was intrigued and wanted to carefully look into Lyft’s Personal Power Zones and figure out exactly what the purpose of PPZ is. Is it really something the drivers would benefit from or is it another way of Lyft reaching into the driver’s pockets?

PPZ is a zone based system, purple and pink boxes pop up within the driver app while you're driving to alert you of a power zone. All you have to do is simply pull over and park in the pink zone if you can, turn on your app and wait for a ping, the longer you stay in the pink zone the higher your bonus will be. Every few seconds Lyft will increase the bonus by a few pennies until it reaches a limit. Being in the pink zone does not guarantee that you'll get a ping, you may be in a dead area, you may end up waiting for 15 minutes. But Lyft wants you to stay put if you want the extra cheese, if you move out of the pink box Lyft will give you a chance in the purple outline. Of course, who's to say that they won't throw you a garbage ping with a pick up time of 15 minutes, if you decline, “NO SOUP FOR YOU”! You failed, back of the line. 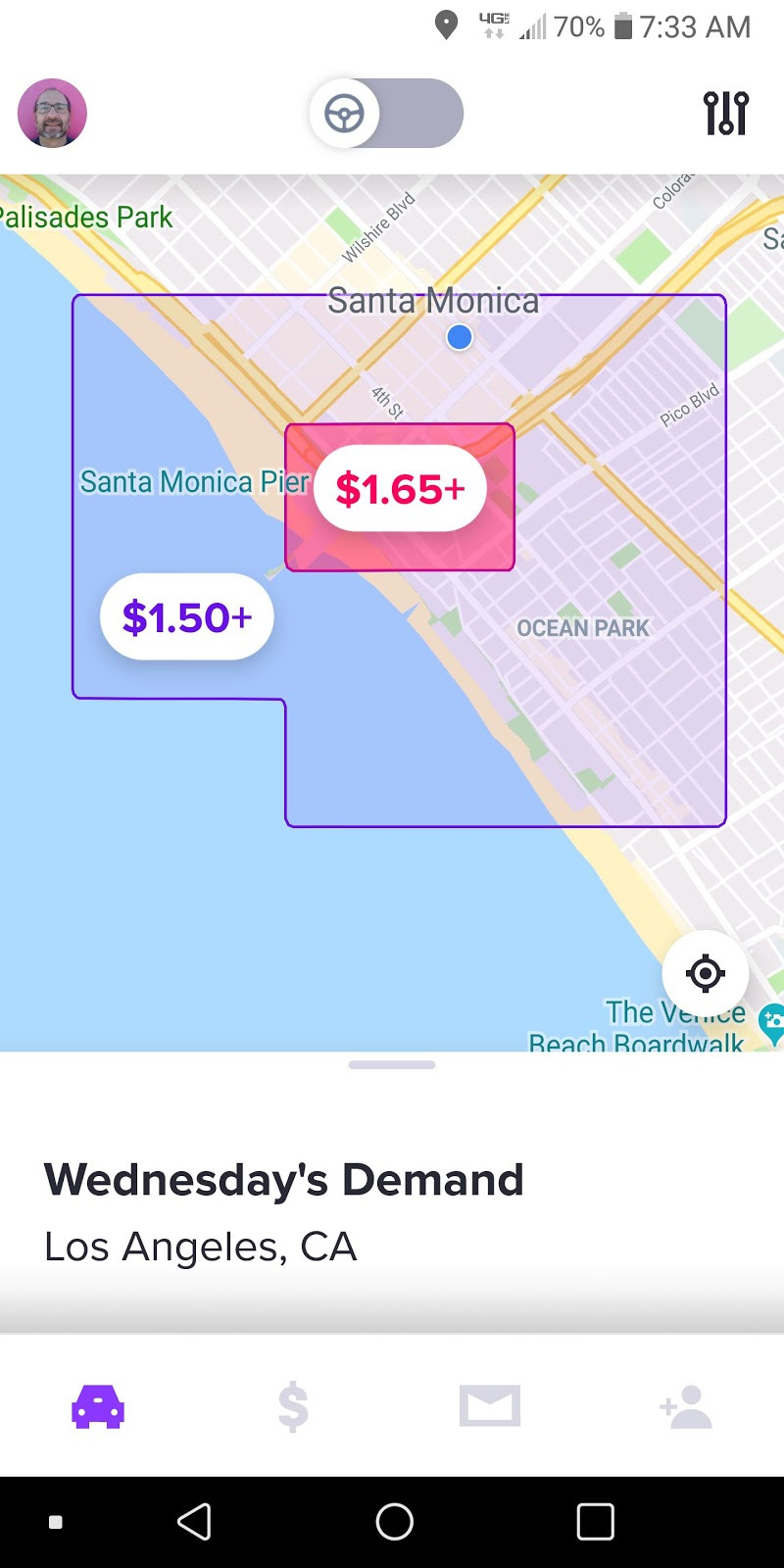 You would think they want me to rent a boat to fetch that passenger in the Pacific Ocean. I think even the most subservient driver will decline that ride. A little humor people, no passenger would order a ride from their yacht in Santa Monica!

If you are a driver in a small town or rural area, you may like PPZ since PT (Prime Time) rides were hard to come by. It is an incentive, albeit a small one, for you to turn your app on but more importantly, it is an incentive for you to stay on the Lyft platform instead of switching to Uber. But if you drive in a major city like New York, Los Angeles, or San Francisco where the bulk of Lyft’s rides are generated, you are not a happy camper, it is clearly another earnings cut! Drivers incomes have gone down appreciably over the past few years. I used to think that a high driver attrition rate wouldn’t be good for Lyft & Uber. Now, I think the opposite, these companies like the fact that new drivers don't have a point of reference to set a baseline for gross earnings and whatever Lyft decides to give them, even if it is a small bonus with PPZ, it is a positive.

My Take on How Lyft PPZ (Personal Power Zones) was created!

It seems as though, Lyft’s personal power zones are derived from the roulette wheel in Las Vegas. The longer you watch it go around the more endorphins are released in your brain, the more mesmerized you are by the numbers flying by and then figure what euphoria you'll experience if your number hits. Well, PPZ is like that, once you're in the pink zone, the numbers start increasing every few seconds, the anticipation is maddening and finally you get a ping. Here it is, your number has landed. We know Lyft has an army of human behavior scientists working on these types of games they play with their drivers. It is evident in their emails, announcements, and now this game of PPZ.

Then their product engineers write the code for it and unleash it onto their poor and unsuspecting drivers, sugar coated it with the typical fancy words as “clearer and more reliable earnings”. Do they really think that drivers are clueless? I think they do and the proof is in the pudding. There are more Uber and Lyft drivers on the road today driving for almost half the rates as a few years ago. They count on their recruiting machines to replace all the jaded veterans (according to their data, 80% quit in less than a year) with drivers who are tickled pink to make $15 per hour gross.

Who benefits the most from Lyft’s PPZ, the driver, the passenger, or only Lyft?

Well, the following screenshots are self explanatory but I will add commentary illustrating the particulars. 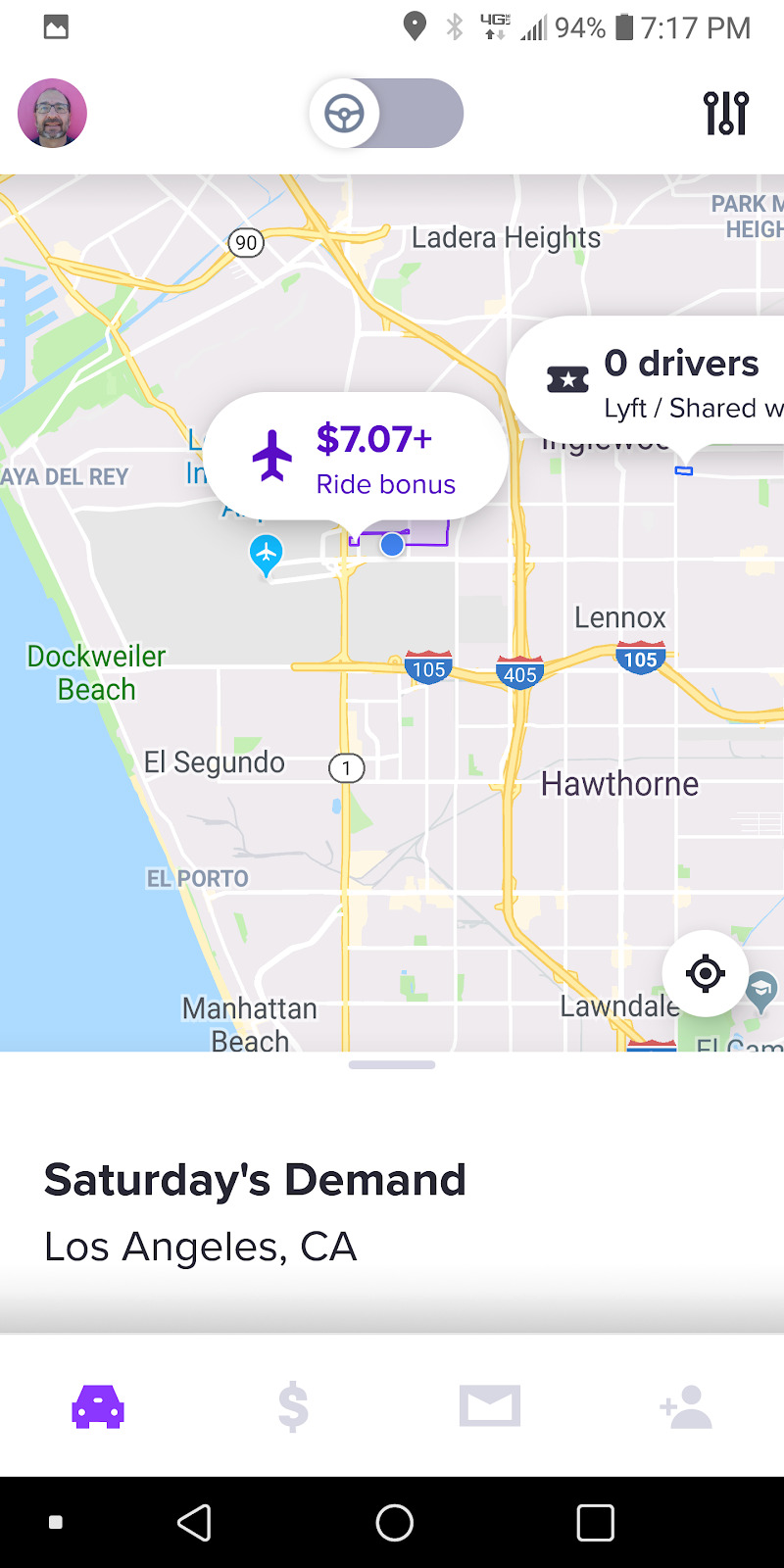 This screenshot was taken last week at LAX but it is now the new normal since PPZ came to town. This was on a Friday afternoon rush hour where traffic on all Los Angeles freeways was gridlocked. The ride was priced on my Lyft passenger app from LAX to my house, it is exactly 30 miles and at that time it would have taken about 90 minutes.

There are two magic acronyms for Uber and Lyft, they are UP (Upfront Pricing) and RPB (Revenue percentage per booking). In my opinion, this is going to be their way to profitability, I have no doubt. What is the RPB on the ride above? A whopping 50%! 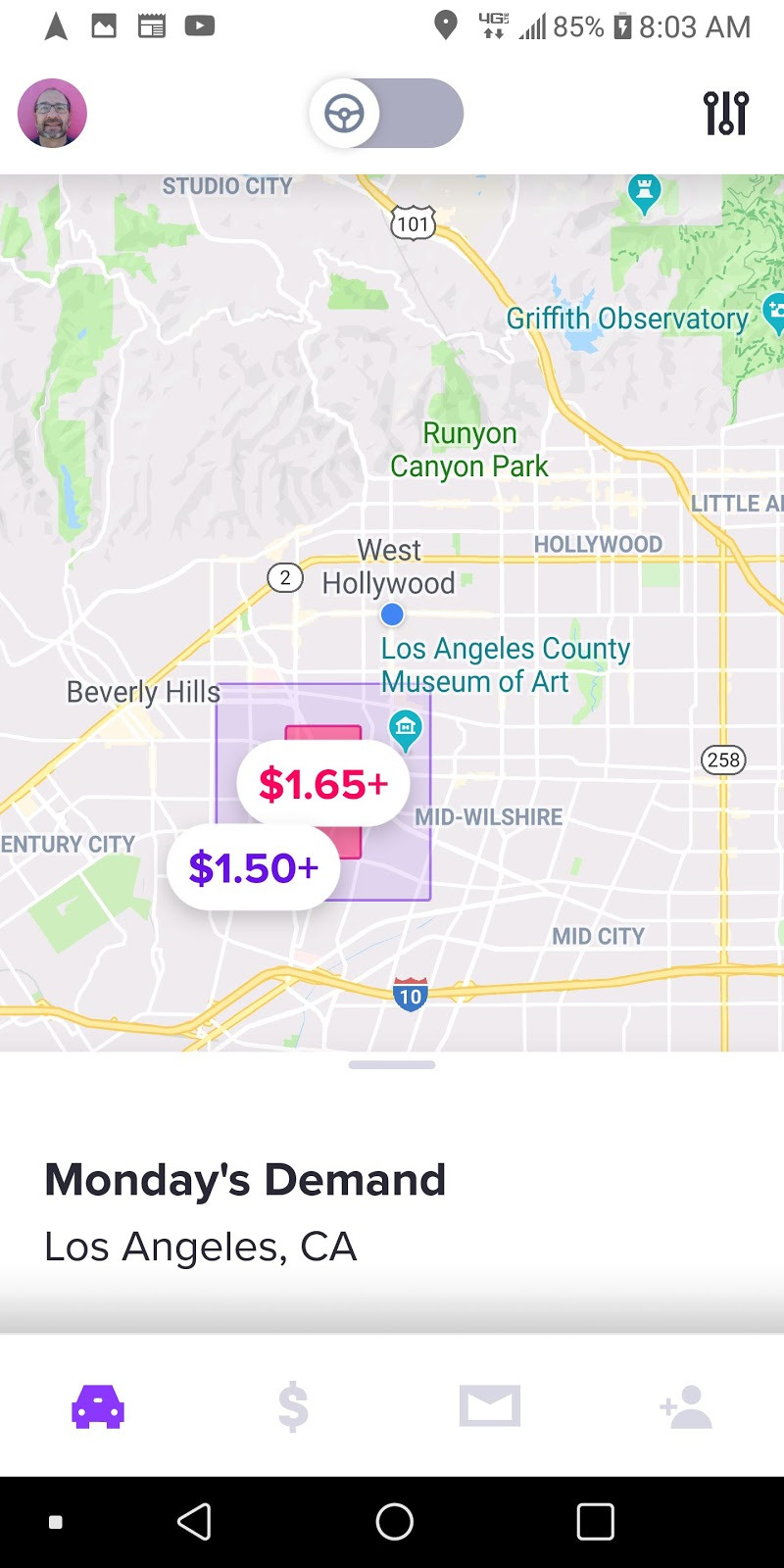 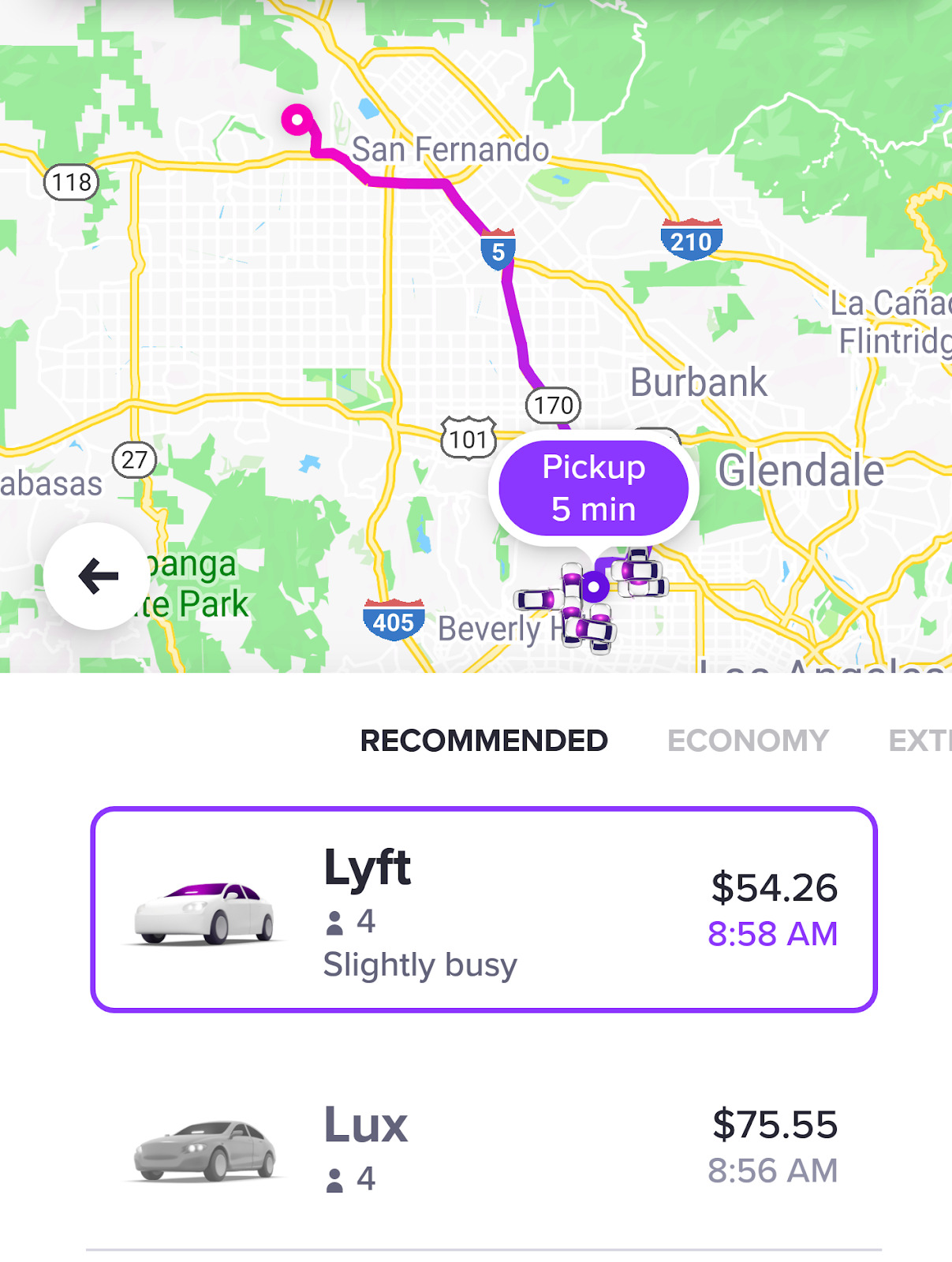 I didn't because as you can see on the screenshot for Uber, it was surging 2x! 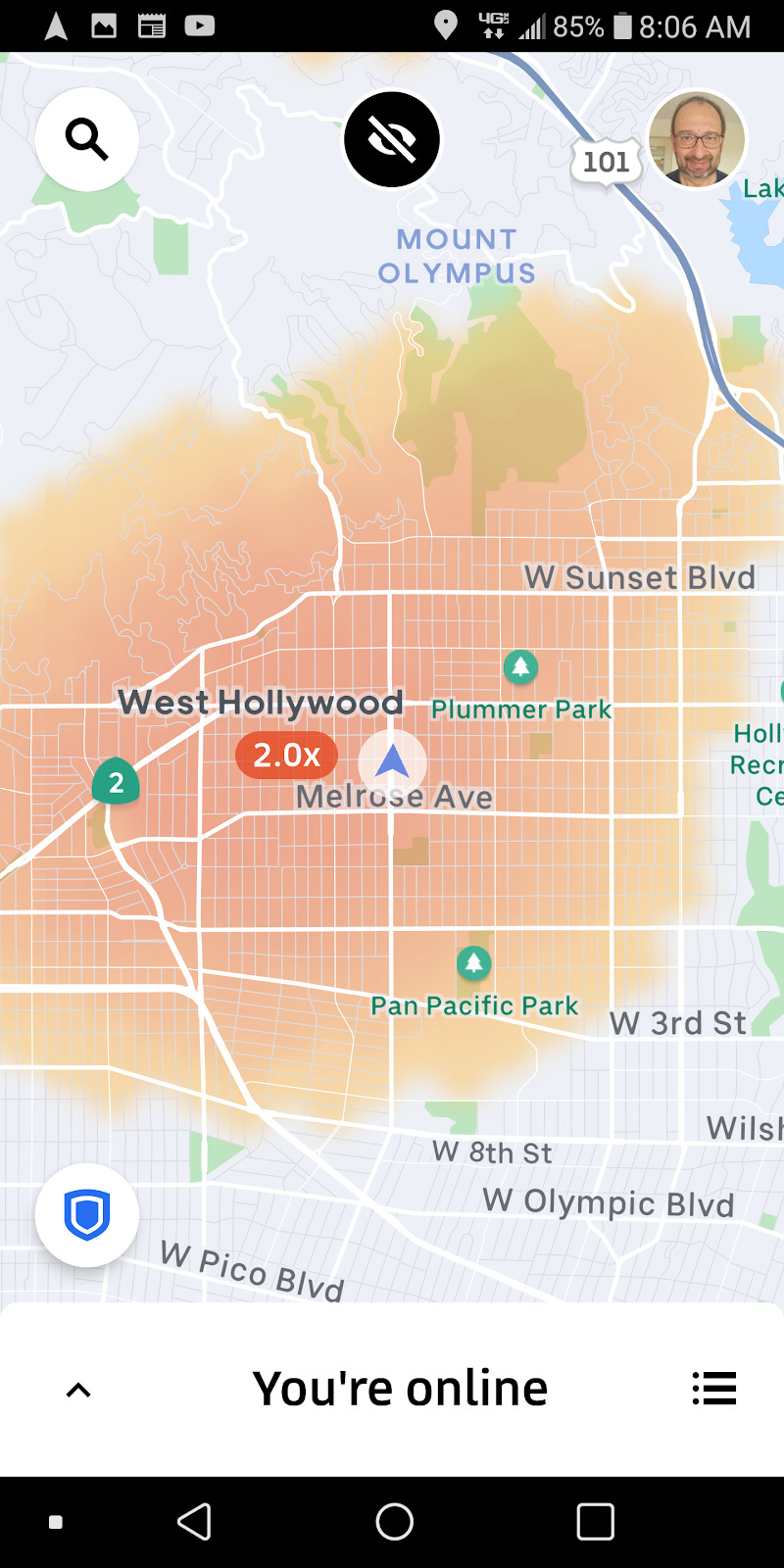 As far as I am concerned, PPZ is nothing more than a money grab out of the driver’s pocket. Uber’s flat rate surge and Lyft’s PPZ are designed to increase RPB (Revenue Percentage per Booking) and their path to profitability. But to me PPZ is the worse of two evils. Lyft is still charging the passenger full PT (Prime Time) and cutting the driver completely out of the equation. Why can’t Lyft just take a fair cut like 20% (used to be that way) and be done with it. Uber & Lyft get away with breaking a lot of laws (Transportation - Labor) by calling themselves technology companies. If that is the case, like Mastercard and Visa do as transaction facilitators, take your cut out of what the passenger pays and be done with it. I think taking 50% of the fare without owning a car, doing the actual driving, and risking potential accidents is highway robbery.

Check your receipts, you will all find out what Lyft’s RPB is on each ride. They are cutting rates, eliminating quests/PDB (Power Driver Bonus), getting rid of consecutive streak bonuses, what meat is left on the bone? Driver dissatisfaction is through the roof all around the globe, specifically in the U.S, they want higher, not more reliable, dependable, easy to understand earnings. Well, to each their own, do you want to keep driving for Lyft with PPZ or do you want PT back?

The driver should have the choice of keeping PT or go on PPZ. GIVE ME MY PT BACK! Good luck out there and be safe!