As a driver and passenger on the Uber and Lyft platforms, my top concern is always the safety of riders and drivers. I frequently think about how things have changed over the past few decades with the proliferation of app based services such as ride hailing companies. Do you all remember the advice you received from your parents when you were a child? “Whatever you do, don't get into a stranger’s car!” Well, millions of people do exactly the opposite by getting in a car with a complete stranger to the tune of about 5 million times a day. Granted, Uber and Lyft have made transportation a lot more convenient and accessible but at what cost? 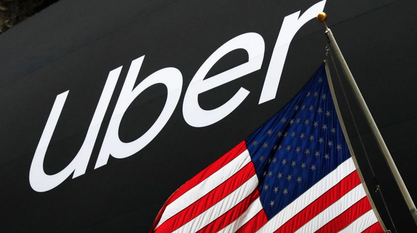 Uber released this week the widely anticipated safety report for 2017 and 2018. Although sexual assault reports presented in it were small as a percentage (0.0003%) of total rides (2.3 billion in two years), there were over 6,000 incidents. That is a staggering number but I guess it is expected if you consider the vast amount of rides Uber provided over those two years.

Uber admitted to 3,045 reported sexual assaults by its drivers/passengers in 2018 and 2,936 in 2017, the New York Times reports. The ride-hailing service also recorded 5,500 other incidents of groping or unwanted sexual touching in those two years. The safety report showed 10 murders in 2017, and 9 murders in 2018, which was evenly split between driver and passenger deaths. In fact, drivers were actually the victims in 45 percent of the total incidents, so Uber and Lyft should do their utmost to protect the passengers and drivers alike. About 1.4% of those 2.3 billion rides were involved in a traffic accident as well it recorded 58 crash fatalities in 2018 and 49 in 2017. Uber says 99.9 percent of riders were safely ferried to their destinations, which is true. And many sexual assault awareness advocates are applauding Uber’s transparency. However, considering that only 1 out of 3 women actually report these types of incidents, I assume the numbers are a lot larger than this report suggests. There are some caveats with the report, of course. It only details five categories of violence and, while Uber is a massive international company, this data only focuses on the U.S. for just two years! The report itself is a result of several high-profile cases of attacks and lawsuits against the company for not doing more to protect people.

As far as I am concerned, Uber must tighten its background checks on both its drivers and passengers. The watered down checks through a third party (Checker) is certainly not enough to weed out the bad apples. One of the main reasons London refused to renew Uber’s license was exactly due to fake driver accounts, over 14.000 rides were given by drivers who weren't on the Uber platform. I have known this to be a long standing problem not just in the United Kingdom but all over the globe. I commend Uber for coming forward with an in depth safety report and their transparency, where is Lyft? Are they going to release their report soon?

About three weeks ago I received an email from Lyft with this attachment. I was curious about it and since I wouldn't be allowed to go online as a driver and earn a living if I didn't fulfill this online course by December 15, 2019, I decided to complete it. Here are the details of the violence prevention training program. 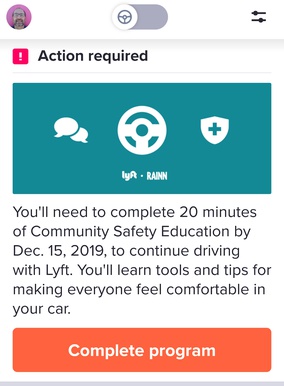 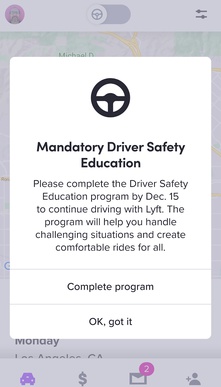 Lyft recently announced three new safety initiatives following a string of scary incidents and a lawsuit from victims last week. All drivers on the app both new hires and existing workers will be required to complete a mandatory "community safety education" program that the company is developing through a partnership with RAINN (Rape, Abuse & Incest National Network). 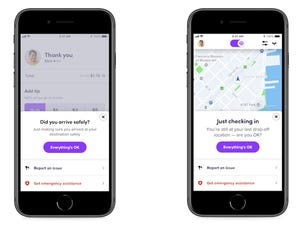 Other announcements include a long-awaited "911 button" inside the app that's now live nationwide and a tool that alerts Lyft safety agents if a ride appears to be going off-course or is otherwise delayed.

Uber, Lyft's biggest competitor launched a panic button in the United States in 2018. "The reality is that certain populations carry a disproportionate burden simply trying to get to work or back home after a night out in the U.S., one in six women will face some form of sexual violence in their lives. The onus is on all of us to learn from any incident, whether it occurs on our platform or not, and then work to help prevent them" said Lyft CEO John Zimmer. These safety measures announced add to previous features that have been part of Lyft's app for some time, like continuous criminal background checks that flag any drivers who may turn up in databases following their initial hiring, and location sharing.

What is the Lyft mandatory driver safety program?

Over the past weekend, I spent about 30 minutes going through Lyft’s new mandatory safety training program. In order to make the annoying and constant in app notifications to go away, I had to watch a series of videos. The whole process left me with some serious questions. If I am an independent contractor as Lyft contends, then why do I have to take mandatory training without pay? This seems like something employees would have to do. And why does everyone have to take the training program? I have been driving for nearly 4 years and no one has ever complained about my driving or conduct as my driver rating screen suggests. 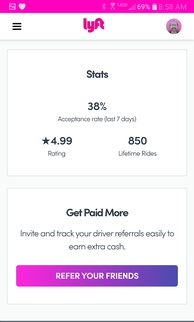 I found the content of the course to be excellent. While much of it is “common sense,” it is always good to be reminded of the importance of respect, personal boundaries and safety.  Each passenger is different, especially if they are inebriated and respond to driver’s questions and comments differently. What one rider will think is a harmless question, may seem intrusive or upsetting to another passenger. 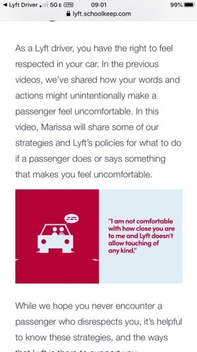 Being that I am a 6 foot 1 inch man, I have never had any experience in which I felt overly concerned or threatened except a couple of occasions in four years. I was most definitely hit on a couple of times, but here again, it was easy for me to politely say “No.”  If I were a 5 foot 2 inch woman driving at night, ferrying drunk men around, I may have a very different outlook on rideshare driving. 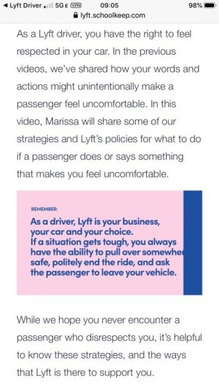 In the screenshot above, we see more education on exactly what a driver can and can’t do in order to deal with an intrusive or threatening situation, Lyft is reminding drivers that they always have the option to pull over, end the ride and politely ask the passenger to leave the vehicle.

In another part of the training, I received suggested comments in the case of a belligerent, obnoxious or aggressive passengers. Of course, as a driver, you also have the option to contact Lyft support after a passenger leaves your car in order to file a complaint about a particularly offensive or abusive passenger.

Overall, I feel Lyft is doing a good thing here.  I found the course to be educational and informational and further increased my awareness of the variety of passengers who enter and exit my personal car.

Is there a deadline to take the Lyft Safety Training Course?

Everyone who drives for Lyft must complete the course prior to December 15, 2019. According to my Lyft in app notification, if you have not completed the course by December 15, you will not be able to drive for Lyft until you sit down and watch the 20-30 minutes of videos.

In some, but not all markets, drivers are being offered a variety of bonuses from Lyft to complete the community safety education program. It depends on your market, but we’ve seen drivers offered $5 for completing the training by a specific date, whereas other drivers are offered $5 for completing the training and giving five 5-star rides. I was not offered any such bonus in Los Angeles.

As I had mentioned above, can Lyft legally require an Independent Contractor to participate and complete this program with a deadline? Since Lyft has control of the app, I suppose they can do whatever they want. If you want to use the Lyft app to drive and make money, then you will have to take this course prior to the deadline. I don’t necessarily think taking this course is a bad thing, it possess valuable information. What makes it somewhat unpleasant is we as drivers are considered Independent Contractors by Lyft. We should not be forced to bow to Lyft’s requirements.

However, we do have to do what Lyft tells us to do. They say “jump” and we say “how high?” It is what it is. As far as I am concerned we are treated as employees, but we don’t have the benefits of being an employee, in fact, if you or I worked for a different company, we would most likely be compensated for our time while we participated in the training program. Instead of driving for 20-30 minutes and making money, I had to pull over and complete the course since I took it to the deadline. Such is the life of a rideshare driver.  We will have to wait and see how AB5 pans out for those of us in California.

How effective are the videos?

I found the videos to be very helpful. I noticed that while driving later in the day, I was far more aware of what I said to the passengers. I also listened to much more closely to the responses of the riders. I found that I was quieter, and only spoke when I had a clear invitation to do so.

These are all valuable results from the course. When drivers can learn to be more sensitive to the passengers, the program worked as intended. Most importantly, the videos were short and to the point. Once you complete the course, you will receive a congratulatory email and be allowed to log in to the Lyft platform. 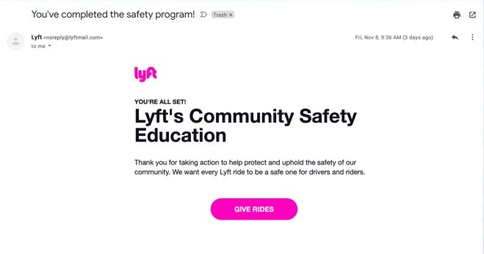 While I don’t like Lyft forcing me to watch these videos in order to keep driving, I do respect their purpose. As I said in the first paragraph, driver and passenger safety is priority number one. If a passenger can’t get into a Lyft car and feel safe, then something is wrong. All passengers need to feel safe and not have to worry about sexual misconduct. Similarly, drivers need to feel safe as well. Hopefully, Lyft will institute this type of educational program for passengers soon as well as tough sign up procedures as a rider.

Drivers, have you been prompted to take Lyft’s safety training program yet? Were you offered an incentive to do so?