There have been many articles in the mainstream media regarding the California law AB5 (Assembly Bill 5) over the past few months. Today, contributor Sergio Avedian will lay the facts regarding AB5, why Uber & Lyft are threatened by it and what they're doing to kill it before it is voted on in the CA Senate.

The gig economy, especially the rideshare industry, has benefited many people over the past decade. With technological innovation, millions of people around the country have signed up with one or multiple companies in various segments of the service industry, such as  rideshare (Uber & Lyft), food delivery (Ubereats, Doordash, Grubhub, Postmates), shopping (Instacart) and freelance jobs (Fiverr, Taskmates). As per Forbes magazine, more than one third of U.S workers are involved in the gig economy, which works out to a very large number. Approximately 57 million people have signed up with multiple apps as full timers but mostly as a supplemental income source to their existing jobs.

As with most gig economy jobs, they all start with the premise of full flexibility and high pay, certainly higher than minimum wage. It turns out that flexibility is the only leg of the table that is still structurally sound. Every other promise has either been watered down or completely eliminated. Unfortunately, as we all have discovered, once these marketplaces have achieved a certain scale (done by massive subsidies to the end user), the rate cuts start rolling in. At this point, most if not all of the above mentioned company IC (Independent Contractors), especially the ones who solely depend on their gig have been left in the dust. Most of the gig economy jobs these days are paying less than minimum wage factoring in all expenses.

Independent contractors are driving millions of people to their destinations, delivering food and taking on many different tasks without any protection from existing employment laws on a daily basis. The gig economy companies have created business plans solely dependent on the IC model. They are not responsible for employment or social security taxes, providing health or retirement benefits, paying for car related expenses such as gas, insurance or maintenance etc., they leave it up to the individual to take care of all the business related costs. Those costs have risen a lot over the past several years. Additionally, due to severe price cuts, the incomes of all gig economy workers have taken a nosedive.

Recently, California just took a major step in rewriting the rules of the gig economy. States are losing a lot of revenue by not collecting taxes due to all gig economy workers being labeled IC (Independent Contractor). The California State Assembly passed AB5 under the leadership of Lorena Gonzalez in May of 2019 and in late August the California Senate is going to vote on this bill that has created a firestorm. Hundreds of thousands of independent contractors in California, ranging from Uber and Amazon drivers to manicurists and exotic dancers, would likely become employees under the bill.

This bill makes it harder to classify workers as independent contractors by codifying an employment test from a groundbreaking 2018 California Supreme Court decision. This “ABC” test says that for a worker to be a contractor rather than an employee, they must meet three conditions: A) they must be “free from the control and direction of the hiring entity” in their work; B) must perform work outside the “usual course of the hiring entity’s business;” and C) must usually be engaged in an independent job or business of the same nature as the work they do for the hiring entity. Both Uber and Lyft would fail the ABC test on all three counts, they want to keep things as is and they are fighting AB5 tooth and nail.

They're also sending coercive messages through their driver’s app to mislead drivers in order to collect as many signatures as possible to oppose the bill. Here’s an example of what the drivers are receiving: 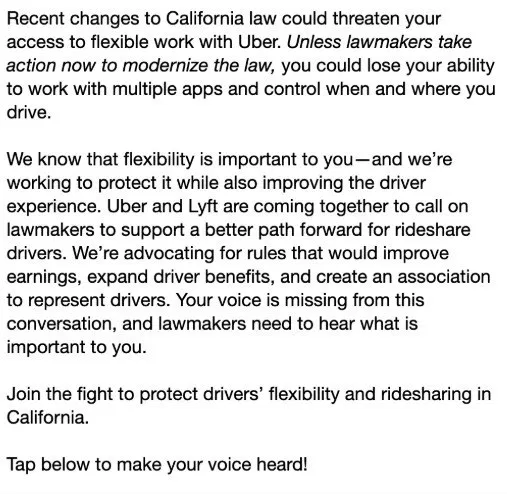 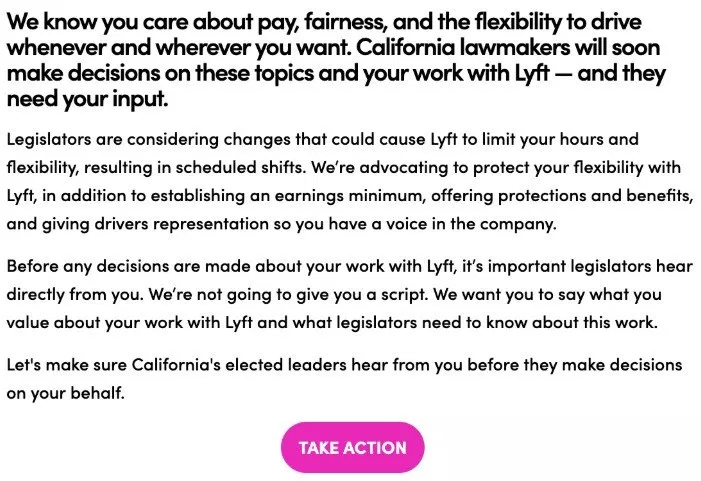 What do you think about these messages drivers are receiving in their app? Many have said they have signed it without reading them in fear of retaliation by Uber and Lyft, in other words, drivers have added their signature  in fear of unjust deactivation. I have read the complete bill, AB5 does not limit anyone's flexibility nor does it hinder anyone from working for both companies.

What will the gig economy workers get under AB5?

As independent contractors, all gig economy workers give up their rights in exchange for a lot of benefits of being an employee. It’s hard to overstate how big a deal this could be for the gig economy. Reclassifying contractors as employees would give those workers all the protections of traditional employment, which under US labor laws are not currently afforded to contractors. Such benefits include social security, unemployment insurance, health benefits, a minimum wage, the right to form a union. It could be very expensive to companies like Uber and Lyft, which would have to cover payroll taxes and workers compensation insurance.

How exposed are gig companies to AB5?

As we can see, a lot of gig companies, small and large, depend on California for most of their revenue. Lyft and Uber have reached massive revenue scales into the billions of dollars, we can see what kind of threat AB5 poses to their existence.

Uber and Lyft call their drivers Independent Contractors. They also call themselves technology companies instead of transportation companies in order to skirt and circumvent all local, state and federal labor and transportation laws. AB5 in its current form will put a stop to all the nonsense they have been able to get away with for the past eight years.

I am certain at some point in our lives, we have all called an electrician or plumber for their services. Most, if not all workers, involved in those trades are IC (Independent Contractors). Let's assume we call a plumber for a leaky faucet, upon placing that call, we ask the plumber to show up at our house without telling them what the job entails or what the job will pay. How many plumbers will jump in their truck and happily show up at your house? I bet the only thing you hear will be the hang-up tone. Well, as so called IC drivers, we pull up in front of a residence, place of work, school, restaurant or the airport terminal to the tune of 6-8 million times a day without knowing what the job is and how much we are going to get paid since we don't set the price for our services either. Uber and Lyft have total control over the driver, their algorithms decide when and where to drive, what the driver will get paid, etc.

Who’s fighting for the Driver’s Rights?

In California, specifically Los Angeles, there's a group called RDU (Rideshare Drivers United). They started with a handful of drivers but within a short period of time, they have grown to 6000 members. They are a group created by the drivers for the driver’s rights. They were the ones who set up the strike and protests in Los Angeles in May of 2019, before the Uber IPO, and with other affiliated groups across the nation they succeeded in a nationwide strike/protest.

Our Demand: A Drivers' Bill of Rights

10% cap on commission for Uber/Lyft on what passenger pays

Include a gas-price indexed surcharge in fare

A Voice on the Job

Uber & Lyft recognition of our independent, driver-led organization, to negotiate on behalf of drivers

The right to organize without retaliation

An elected driver-representative appointed to Uber & Lyft boards of directors

Emission standards for all new vehicles added to the platforms

A quote from the book of Alex Rosenblatt called UberLand sums up the issue very well regarding Uber and Lyft flexibility argument. “The autonomy to choose which fourteen of the twenty-four hours in a day to work does not create the sense of freedom implied by the flexibility rhetoric of Uber and Lyft.”

Uber and Lyft, the vanguards of the gig economy, have staked their entire business model on the ability to pretend that their employees are not employees. In the olden days, it was assumed that someone who works for your company is your employee. In our modern technological age, companies have figured out that if they call their employees “independent contractors,” they don’t have to give them a lot of stuff, workplace protections mandated by law, health care benefits, steady schedules, etc. Also the IC can’t unionize! This is wonderful, from the perspective of the gig economy companies. It has made venture capitalists and top executives very rich in a very short period of time. The only cost has been that it casts millions of people into a hellish netherworld in which they're unable to scrape together a steady, dignified, sustainable life, no matter how hard they try. This is the “gig economy” at work.

People who understand labor issues have long argued that the most direct and effective way to break this modern day digital slavery is to classify their workers as employees. All these companies have done is to find a nifty way to save themselves billions of dollars by circumventing U.S. labor and employment law, which was designed with “employees” in mind.

Uber and Lyft are justifiably threatened, if AB5 is the only deterring factor to stop the steamroller in its tracks that has been flattening the driver’s pocket books, so be it!