Is Driving for Uber & Lyft Really Full of Freedom? Not in New York!

I have enjoyed driving for Uber and Lyft over the past 4 years albeit on a part time basis the last eighteen months due to severe rate cuts. Driver incomes have plummeted over the past couple of years, unfortunately, I don't see things improving unless the state and federal regulators get involved. In California, AB5 has become the law as of January 1, 2020 but way before the legislators acted on clarifying the IC (Independent Contractor) versus Employee debate, New York TLC (Taxi Limousine Commission) passed regulations as far as Uber and Lyft are concerned.

The New York City Council voted in August 2018 in favor of a cap on the number of for-hire delivery and transportation vehicles on the city’s streets, striking a stunning blow to Rideshare companies like Uber and Lyft. The council voted to halt the issuance of new for-hire vehicle licenses for 12 months while it studies the growing industry. Under the cap, Uber and Lyft could still be granted licenses for wheelchair-accessible vehicles but would be prevented from adding new ride-hail vehicles for one year. The city’s Taxi and Limousine Commission could also issue licenses in particular neighborhoods that are running low on ride-hail vehicles. Another bill that passed would establish a $17.38 minimum wage for drivers.

Uber and Lyft have argued that the cap will lead to longer wait times and less reliable service in the city, especially in the outer boroughs. I do not agree with this point at all, Uber and lyft have oversaturated the marketplace to such an extreme that driver UR (Utilization Rates) have collapsed to the low 50% levels. In turn lower UR means lower earnings for the drivers. New York is the first US city to propose a temporary freeze on the total number of ride-hail vehicles. The city is also one of the biggest revenue sources for Uber and Lyft. Right now, there are more than 100,000 for-hire vehicles in New York, outnumbering yellow taxis four to one. Many argue that these FHVs worsen traffic congestion, citing a report that found that more than a third of them were empty at any given time circling Manhattan while waiting for requests.

In August 2019, the city’s permanent cap on for-hire vehicles was made official. Mayor Bill de Blasio proposed extending the yearlong cap on the vehicles back in June 2019 and the New York Taxi & Limousine Commission officially approved the measure at as well as a new “cruising" penalty. The cap bars new for-hire vehicle registrations, which include cars for Uber, Lyft and other ride-hailing companies as well as traditional black car and neighborhood livery services. The "cruising" penalty allows the city to set fines on for-hire companies that don’t meet certain utilization rates, that is, the amount of time drivers spend with a passenger on board while working in Manhattan below 96th Street. Under the new regulation, for-hire companies such as Uber and Lyft must ensure drivers are no more than 36% of the time without a passenger in while in Manhattan. That rate will tighten to 31% by August of 2020.

Unintended Consequences of these Regulations!

These regulations, as well as a recently passed minimum base pay standard for app drivers, have been welcomed by most workers. But drivers say the rules have come with unintended consequences and have not nearly alleviated all of their financial pressures. Many drivers leasing their for-hire cars have said that the cap has inspired predatory leasing rates among companies looking to cash in on a limited supply of vehicle licenses. Some drivers have said they spend $2,000 a month on their leases, devastating them financially. Renting drivers account for 20% of the industry and leasing companies own hundreds of vehicle licenses, according to the Taxi & Limousine Commission.

Uber & Lyft Start Punishing Drivers By Locking Them Out!

Lyft started the ball rolling last year by announcing that access to its app would be limited unless drivers met a certain ride count threshold. They have been tightened since then. 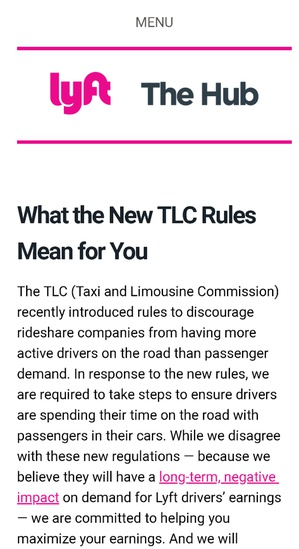 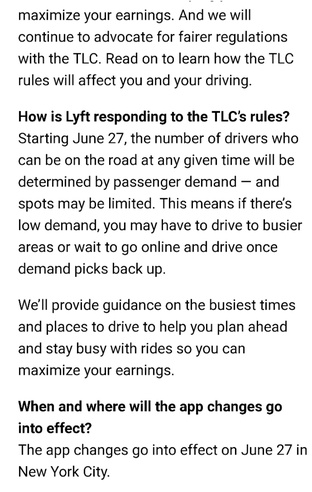 Uber now has joined the party announcing that the company would start manipulating access to its app for New York City drivers as well. This is a move that violates the intent of the city’s pay rules, including blocking access to the app for some drivers and requiring them to drive to areas with more demand in order to log on. The company announced this new policy in an email to drivers today and blamed the New York TLC regulations.

These changes apply to all TLC-licensed drivers who complete trips with Uber in NYC, with the exception of the following drivers, who will be able to go online anytime, anywhere in NYC:

Note that the qualifications for going online anytime may change in the future as Uber tries to improve the driver experience and respond to the TLC Rules.

Uber announced “We want all drivers to be able to go online when and where they choose, but the TLC’s regulations forced these changes. If you’re trying to drive in an area where there isn’t enough rider demand at that time, you will not be able to go online; however, you’ll be able to access a map (coming to the Driver app soon) that will give you real-time information indicating where rider demand is higher. Alternatively, at your discretion, you could try going online in your area at a busier time or reserve times to go online in advance from your Driver app, if you qualify.”

Uber added “Drivers who have completed 425 trips (or 95 Uber Black/SUV trips) with Uber over the prior month and who have at least a 4.8-star rating (reflecting riders’ preferences) will have the ability to go online anytime and anywhere across the 5 boroughs. Drivers who don’t meet the criteria to go online anytime will have the option to choose guaranteed times to go online from the Driver app. You can choose times for the following week starting on these days (depending on the number of trips you’ve completed in the prior month and your star rating): The number of trips you’ve completed will be updated every month. For example, your eligibility for March is based on trips completed in February; in April, it will be based on trips completed in March. Again, please note that the qualifications listed above may change in the future, as we try to improve the driver experience and address the TLC Rules.”

What Are New York Drivers Saying?

I spoke to a few drivers last week. They are truly frustrated that they are not able to log on and drive any time they want and put food on the table for their families. They wanted to stay anonymous due to possible retaliation by Uber and Lyft. However a few of them took to Twitter and vented out.

I have not worked this week, not because I don’t want to, but because @Uber_NYC is not letting me. All time slots have been unavailable. Only few hours are available on Friday and weekend. What are my options? How am I supposed to provide for my family? @nyctaxi @NYCMayor

A lot of drivers are locked out since Uber and Lyft have set very stringent ride quotas and daily planners for drivers, it looks like they want only full time drivers in New York now. What happened to Freedom & Flexibility? I guess it comes with a heavy price and who is suffering from the unintended consequence of laws passed to protect drivers? THE DRIVER! A lot of them must feel like they are in a game of Whack-a-mole! When drivers take their concerns and frustrations to the New York TLC Commission, they are getting responses like the following sent to me by a driver. 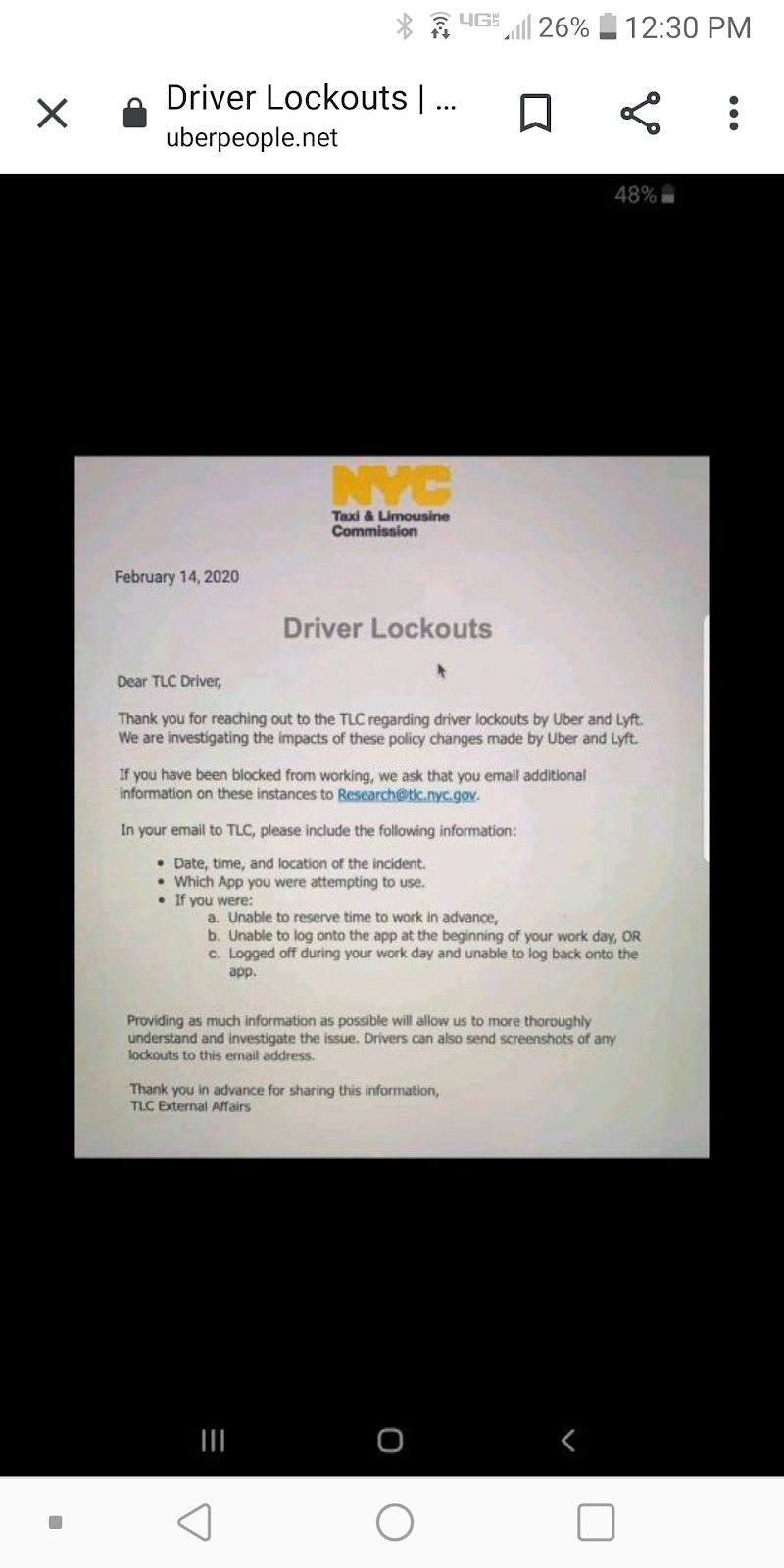 So whichever way drivers turn, they are getting the runaround! Is it fair? Of course not! Is what Uber and Lyft are doing legal? Yes, it is! Is it ethical? Definitely not! But in today’s app based gig economy, the loser always seems to be the workers. Millions have bought into Uber and Lyft PR of Flexibility and Freedom. I guess those words only apply as long as these companies are not regulated. I really can’t blame Uber or Lyft for what they’re doing, they are fighting for billions of dollars of market capitalization and their existence.

But why are we here? Why did Uber and Lyft oversaturate the marketplace with tens of thousands of cars? It all comes down to utilization rates. The utilization rate for TNCs and the Driver are very different. TNCs utilization rates depend solely on passenger demand and driver supply in a certain city at a certain time. Both companies have all the data regarding supply and demand going back a decade. However, the most important metric for TNCs is passenger wait times after they order a ride, not how much money their drivers make! For the driver, utilization rates mean something very different, it means having a passenger in the car and maximizing their income.

However, is it fair to drivers who now cannot make a living? Is it fair for TNCs to have total control? The initial PR campaign for Uber and Lyft boasted of logging into the platform and making money any time drivers wished. That has proven to be a very valuable tool for both of them to replace the massive numbers of drivers quitting every six months. Passenger wait times got cut in half over the past few years since these days there are so many drivers on the road. How did that help utilization rates for the drivers? It did not! No one told Uber and Lyft to dump unlimited amounts of cars on the road but now they are retaliating and forcing drivers offline or not allowing them to log onto the platform at all, shameful really!