Is the Scooter Era Ending?

About a decade ago, scooters, rideshares, and E-bikes did not even exist in our vocabulary. But we all have come to appreciate the usefulness of these new transportation choices. I have extensively written about the Micro Mobility Industry in the past. Initially, I thought that scooters and e-bikes had their place in cities, not knowing that they would proliferate like wild mushrooms. As with anything new, they looked like they were fun to ride. However, as we know now, they became a nuisance for most drivers, a regulatory nightmare for city officials, residents and a definite health hazard for riders. 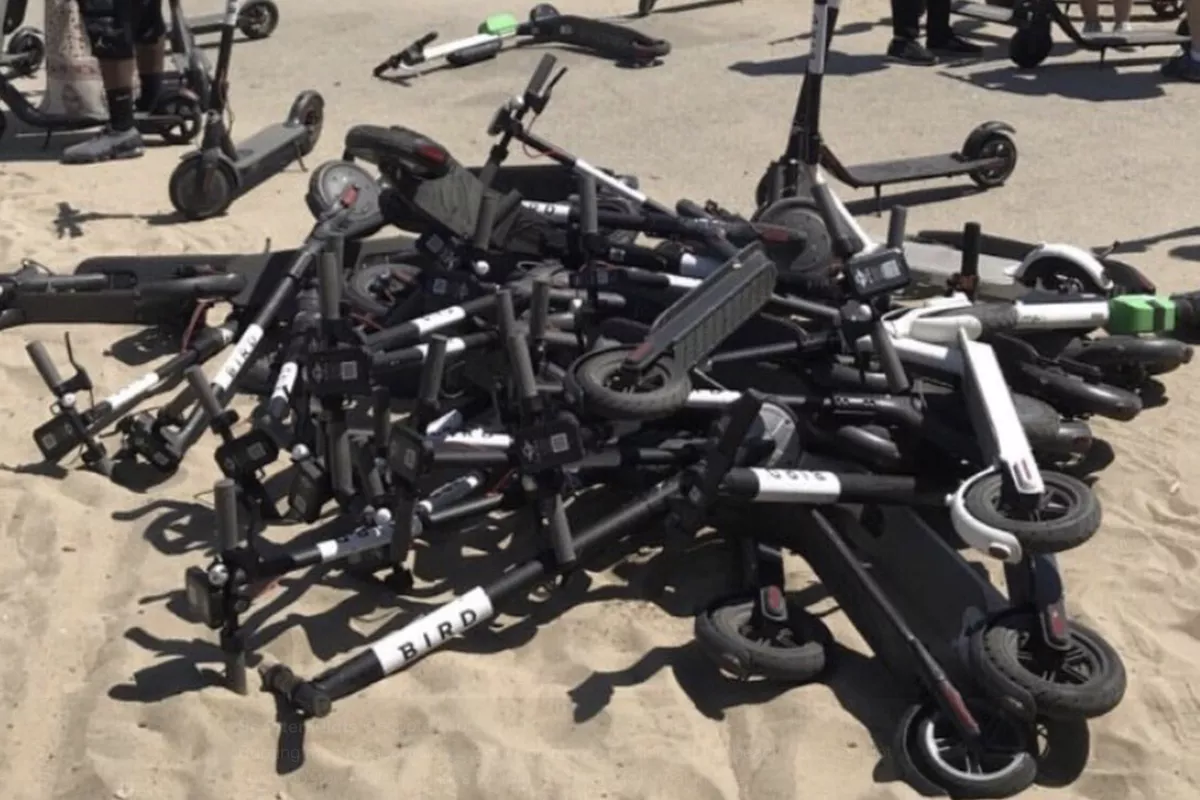 Who is going to win the Scooter Wars?

Startups like Bird, Lime, Spin, and Wheels have invaded dozens of U.S. cities with their tech-savvy scooter fleets over the past couple of years. Investors poured hundreds of millions into the scooter companies with the hope that the best-capitalized scooter company will win. But as the prior Rideshare Wars between Uber and Lyft demonstrated, money alone is not enough.

For all the attention and money that Bird, Lime, Spin, Wheels have raised and Lyft has spent, they are not going to win the Scooter Wars.

The Uber of scooters is going to be Uber. Despite not having a single scooter, it is already a dominant incumbent with significant built-in advantages. To understand why Uber will dominate the scooter sector, it is important to understand the nature of two-sided markets. Like other marketplaces, think Airbnb and Amazon, Uber brings together supply and demand. Demand comes from consumers wanting to go from A to B. Supply comes from drivers giving rides in their own cars. If you have a lot of demand, it’s relatively easy to build out new supply.

So when Uber bought Jump, the bike-sharing startup, it signaled the beginning of the end of Bird, Lime and Spin. Why? Because Uber already won the ride-sharing wars and now has a dominant source of demand for mobility solutions. When you combine this advantage with the lessons Uber learned from its first fight, the only hope for the scooter companies is an anti-Uber backlash, to be bought by Uber or consolidate. Defenders of valuations for the scooter companies point to the differences from ride-sharing. While it is true that scooter sharing has different supply logistics and somehow better economics than ride-sharing, the problem with the argument is that the two actually have more similarities than differences.

What could go wrong has gone wrong for Scooter companies!

Even scarier for a scooter investor is the risk that Uber and Lyft, with their expensive customer acquisition, would use scooters as a way to acquire customers for their more lucrative ride-sharing businesses. It might even make economic sense for the ride-sharing companies to give away scooter rides for free just to get more consumers using their apps. If a scooter rider is using Uber or Lyft to find scooters, what happens when it is raining, or the rider is running late? They are likely to pay up for a car ride instead of saving money with a soggy, late, scooter ride.

So look for the ride-sharing companies to test free or subscription-based scooter rides as a way to cut their own customer-acquisition costs. If it works, the scooter companies are toast. Their economics will suddenly be upside down, as consumers realize a nearby scooter is available through a ride-sharing app for free or very low cost. 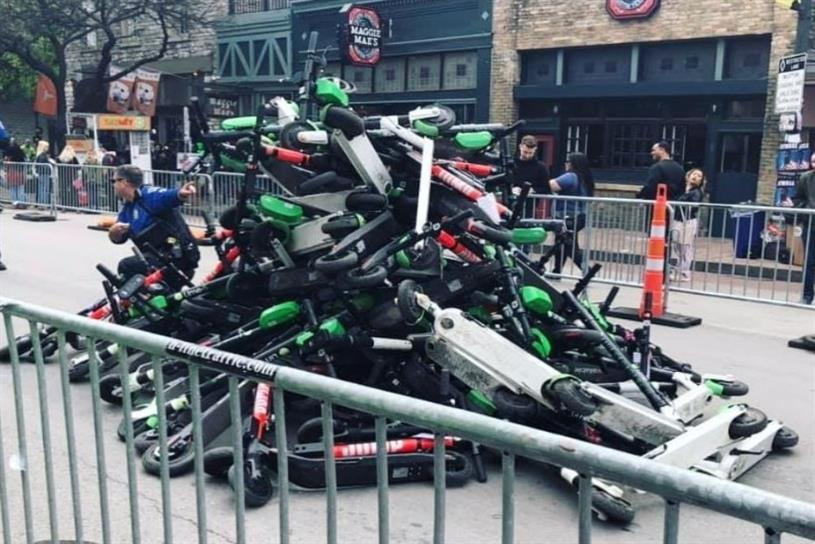 Trendy e-scooters might not be as GREEN as they seem

Companies that distribute shared e-scooters tout the environmental benefits of getting people out of cars and onto something that is battery powered and emissions free. To determine whether the scooters are in fact a ‘green’ form of transportation, studies were done by disassembling a scooter in the lab and calculated what it took to produce it.

Aluminium in the scooter frame and lithium in the battery must be mined, and all the vehicle’s components manufactured. Those steps accounted for about half of the greenhouse gases an e-scooter is responsible for over its lifetime. Almost as significant were the environmental costs of collecting discarded scooters and transporting them to charging stations, a task usually performed by scooter-company employees driving personal vehicles. Using an e-scooter is more carbon intensive than walking or biking. The scooters are environmentally friendly only when people use them for trips they would otherwise take in cars.

Electric scooters have been hailed as efficient alternatives in urban transportation. But they aren’t without their downsides, with one of the major ones being injuries to riders. As the number of accidents increases, hospitals and even the CDC are conducting studies to better understand the issue. Because the scooters can be picked up and dropped off anywhere in the city, riders always almost forgo wearing a helmet. Carrying the helmet around is considered a nuisance with a vast majority of riders. To make matters worse, the small wheels on such electric scooters make the vehicles less stable than bicycles. While they work great on smooth paths, potholes or road cracks can easily send a scooter and its rider tumbling. That can spell disaster for riders not wearing helmets, according to a recent CNBC investigation.

Many hospitals have begun sharing statistics related to these scooter injuries. Data from UCLA’s University Medical Center in Santa Monica and Ronald Reagan Medical Center show that 249 people were admitted to their ERs with injuries from electric scooters. Most of those injuries were from falls, not collisions. The University of San Diego Medical Center says it has admitted 42 people with severe injuries from electric scooter accidents. Of those, only one person was wearing a helmet. A total of 48% of those riders were measured to have a blood alcohol level higher than the legal limit for intoxication and 52% tested positive for illegal drugs. (Marijuana is legal to consume on a recreational level) The phenomenon has grown so large across the US that the Centers for Disease Control (CDC) has begun their own study. As unfortunate as these injuries are, I don’t think we can be surprised by them. The scooter companies are reporting tens of millions of rides. With that much usage, it isn’t hard to imagine that hundreds of falls are occurring. The bigger issue here is why these injuries are taking place. It seems that there are two main reasons both relating to users: inexperience on the scooters and riding under the influence of alcohol or drugs.

One topic I heard a lot in investor circles last year and in the press was that there weren’t good unit economics and therefore the scooter market was never going to perform well. If you read the important book, “Blitzscaling”, you’ll realize that in some markets that are large, being disruptive and being first is more important than short-term unit economics. This is only true when: 1) there is funding available to finance short-term losses and 2) when there is a lucrative positive unit-economics business when you become the winner.

Simply put, there is no viable business running on commodity consumer scooter hardware. You must have your own vehicle teams or access inventory by a supplier that knows how to produce for industrial usage. But what is unique about scooter companies is that with each generation of scooter platform they launch they hope to improve their unit economics. In the ride hailing market there is a competition for drivers and they eat a large part of the consumers’ fee for a ride. In the scooter market, the consumer is the driver. Their time is free and there is no “driver COGS” (costs of goods sold). While the ride-hailing market sees autonomous vehicles as nirvana due to no driver costs, the e-scooter market already has this built in. 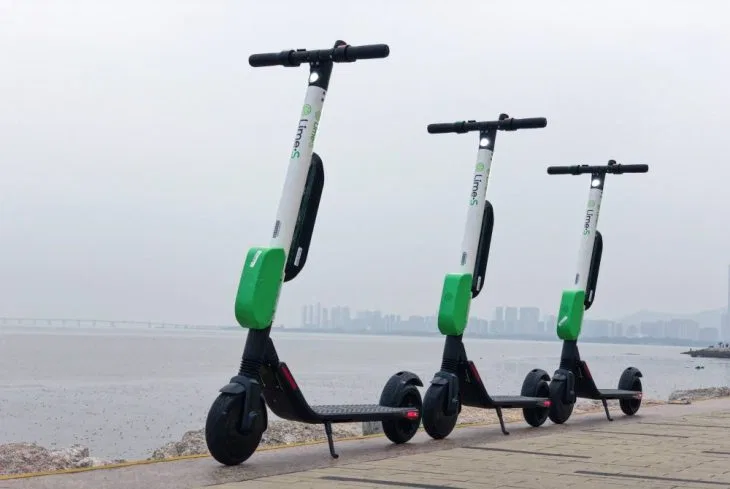 Lime, the world's largest scooter sharing company, is pulling out of 12 markets and laying off staff as it struggles to become profitable. In the US, Lime will exit Atlanta, Phoenix, San Diego and San Antonio. Overseas, it's pulling out of cities including Bogota, Lima and Rio de Janeiro.

Lime is eliminating 14% of its full-time employees worldwide, which will impact about 100 people, according to the company. The company said it was struggling to turn a profit amid low ridership, and that it is facing regulatory challenges in some of these markets, including bans on nighttime riding and high fees to operate.

Lime has raised $777 million and was valued at $2.4 billion as scooters proved popular with people taking short trips in congested cities. Lime and Bird have grown even faster than Uber and Lyft did in their early years, but have struggled to turn a profit. Electric scooters have short lifespans, and are sometimes stolen or vandalized, causing replacement costs to mount. Profits are the mother’s milk for corporations, after the IPO disasters of Uber and lyft, I bet these lofty valuations are not even half of what they were.

Scooter companies are retreating from a lot of cities. Uber and Skip have both pulled out of San Diego, electric scooter enthusiasts in Nashville, San Antonio and Columbus, Ohio, will have one less brand to ride as well. Lyft is ending its scooter service in six cities, the decision has resulted in 20 layoffs in its bikes and scooters team, which consists of about 400 people.

Well, as I wrote on RideGuru previously, the Scooter Wars seem to turn into a nightmare for many Unicorns. I bet we shortly will start hearing about massive consolidation in this industry if not outright shut downs and layoffs.