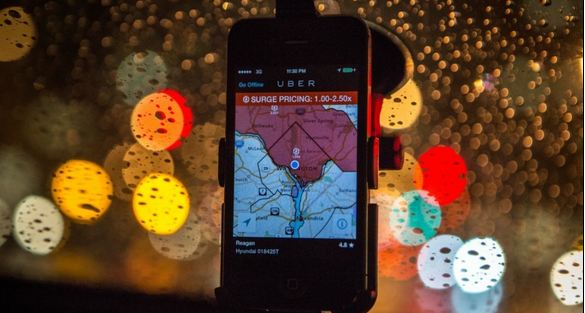 What is surge pricing?

Surge pricing is how rideshare companies aim to control supply and demand. Surge pricing happens when there is a high demand for cars (ie: lots of riders are looking for a ride in the same area) and there are not enough drivers to satisfy all the riders. The goal of surge pricing is to incentive drivers to complete trips during the busiest hours. Surge pricing fixes this excess demand by applying a multiplier on every fare, therefore raising prices by certain percentages. Some riders will opt to not pay the higher fare making more cars available for those passengers who are willing to pay the surge. Surge pricing can happen at any point but it is most common during rush hour, bad weather, holidays, and weekends -- all times when there is a sense of urgency to get a ride.

Surge pricing has historically been visualized to the user on their application prior to completing the trip. Using Uber as an example, in their previous pricing model, users would be prompted to "accept"a surge based on the excess demand, using a rate given by Uber, such as "2.2X" or "7.0X". Uber has an up-front pricing model, which has surge pricing integrated. This model requires passengers to input their destination address before requesting a car. Based on the trip duration, distance, and demand, Uber will provide you with an upfront fare price.If you happen to request a car during a surge pricing period, the price you will be quoted will include the extra surge. In other words, instead of seeing that your ride will have a "2.5X" on a typical $10 fare, you will simply see a fare quote for $25. This means that your Uber upfront fare between two static points will always be changing based on Uber's current supply and demand - it is essentially a sneaky way for Uber to "hide" their surge pricing.While Uber's new method may seem more transparent about your total fare price, you still need to be careful as Uber treats their "Upfront Prices" as estimates only and you could be charged more than your upfront fare for your ride!

What companies use surge pricing?

Why is Surge Pricing Controversial?

Surge pricing can be beneficial because it helps to meet the high demand of people needing cars by giving drivers an incentive to turn on their apps, but it is also a controversial topic. Sometimes, the surge prices can be extreme, and it can cost hundreds of dollars to make a journey that normally would cost less than $20. Ridesharing companies also tend to enact surge pricing when people need cars the most, during dangerous weather conditions such as snow storms and torrential downpours. This makes it harder for people to travel during emergencies unless they are willing to pay the extra price. These companies have started to cut down on surge pricing during emergencies after many people were disgruntled by their lack of compassion but it seems like there are still plenty of times when people need a ride in an emergency and find themselves faced with an exorbitant bill.Have you ever been stuck with a hefty bill due to Uber's surge pricing? Share your stories below!

Since April of 2016, Uber has been experimenting with the concept of "upfront pricing." Under this model, Uber quotes you the price prior to the trip, and they will honor that pricing regardless of the distance or duration traveled. (Note: this is assuming you don’t request the route or destination to be changed.) Uber praises this concept as keeping the riders informed and simplifying their service as there is “no math and no surprises.” However, this has drawn criticism because the price they charge can be higher than the rates posted on their website, which are based on distance and duration.

How can Uber justify it? They admit this is due to the demand-based pricing they incorporate into upfront pricing. Demand-based? Does that sound familiar? Yes, upfront pricing can contain surge multiplier, and Uber does not even indicate this on the pricing.

Here's a quote from Uber:
Upfront fares are calculated using the expected time and distance of the trip and local traffic, as well as how many riders and nearby drivers are using Uber at that moment. And when fares go up due to increased demand, instead of surge lightning bolts and pop-up screens, riders are given the actual fare before they request their ride. There’s no complicated math and no surprises: passengers can just sit back and enjoy the ride. https://newsroom.uber.com/upfront-fares-no-math-and-no-surprises/

Uber is also being criticized for allegedly paying drivers their share on the lower price point, the part that is calculated using the posted rates without surge. This means that any additional fare assessed as part of upfront pricing is going directly to Uber. Our friends cover the story here:

The market is calling this Uber's attempt to overcharge the consumers and underpay the drivers. If you notice noticeable fare differences between RideGuru and Uber's estimates, this is usually the cause. You may want to go back to the price comparison list, and potentially pick an alternate ride at a lower cost.