What is the Dutch Reach? 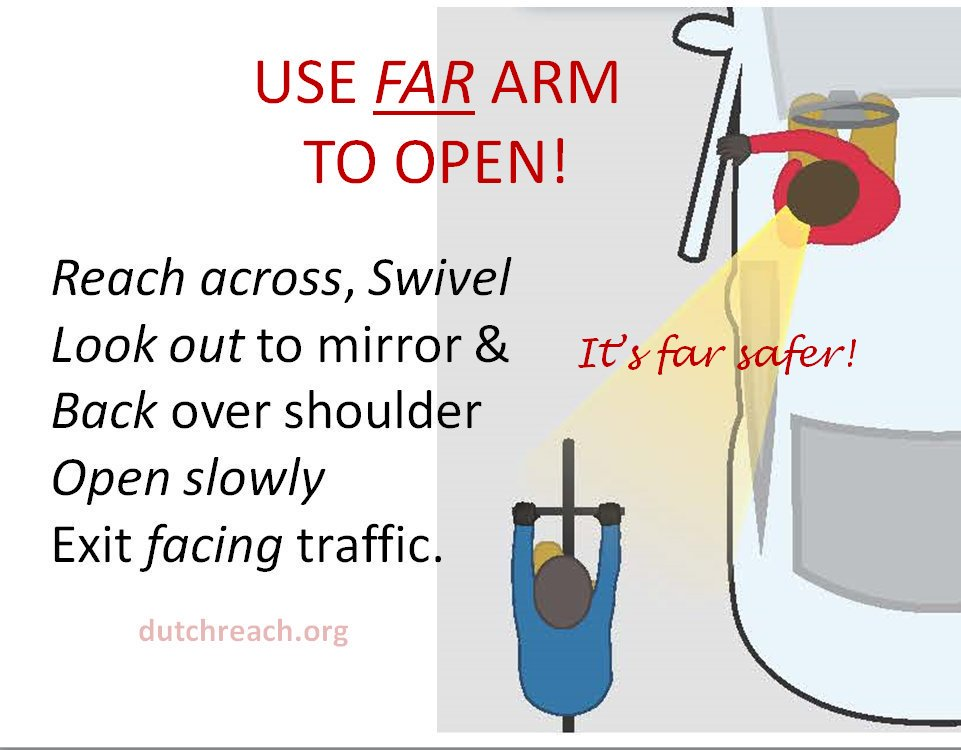 Cycling, or riding a bicycle, is a great way to get around, commute, be outside, and get some exercise. It has been a very popular way of getting for over a century. Europe is known for their cyclists. Amsterdam has more bicycles than citizens. There are so many upsides to bicycling around, but there are downsides too. Cyclists are a vulnerable demographic, and bicycle fatalities are on the rise and higher than they have been in over twenty years.

A bicycle crashing into a car door being opened by an oblivious driver has been used as comic relief or distraction in many movies and TV shows, but it is no laughing matter. This occurrence causes many accidents every year. These accidents cause injuries ranging from bruises to paralysis to even death. It is serious and almost completely avoidable.

The Dutch Reach is a simple technique that can save time, money, injuries, and lives. Most people open their car door with the hand nearest the door. This is easy, but allows people to be the oblivious driver from the movies. The Dutch Reach requires people to use the arm opposite the door, causing the body to swivel and look at the mirror to see if there are any bikes coming towards the car.

There are so many ways to prevent bicycle related fatalities, but the Dutch Reach is one of the most popular concepts. The concept is still fairly new to Americans but very familiar to the Dutch. It originated in the Netherlands and has been a part of the driving curriculum since the 1970’s. The Netherlands is a country with an enthusiasm for cycling, so it’s no wonder they began preventing fatalities over forty years ago. Today, children watch and learn from their parents. The technique is taught in drivers’ education, and students do not pass the class and earn their licenses without demonstrating properly. The term was coined by Michael Charney in 2016 for an American audience, and he is advocating for cyclists lives by asking for change and that the Dutch Reach be instituted into everyday lives, everywhere.

The technique doesn’t take any more time than the old way of opening a door, but the technique can have a huge impact on people’s lives and overall health. As cities continue to grow and people use bicycles as transportation more and more, the Dutch Reach could prove to be incredibly important.