Is Uber Just A Payment Collection Agency For Drivers Now? Must Read For All Drivers & Passengers.

I have written extensively in the past about the changes Uber has implemented for California drivers since November of 2019! They are seemingly positive but Uber decided to push a new PAA (Platform Service Agreement) through the app on January 6. 2020. All drivers were forced to sign it in order to log on to the platform and earn a living. Before the PAA there was the TSA (Technology Services Agreement) in 2019 and TOS (Terms of Service). They are all long legal documents and I doubt that other than a handful of drivers a vast majority will not waste their time to read them. However, I took my time and read the new PAA in its entirety. The changes in language are directly targeting the ABC test of the California AB5 law which went into effect on January 1, 2020. 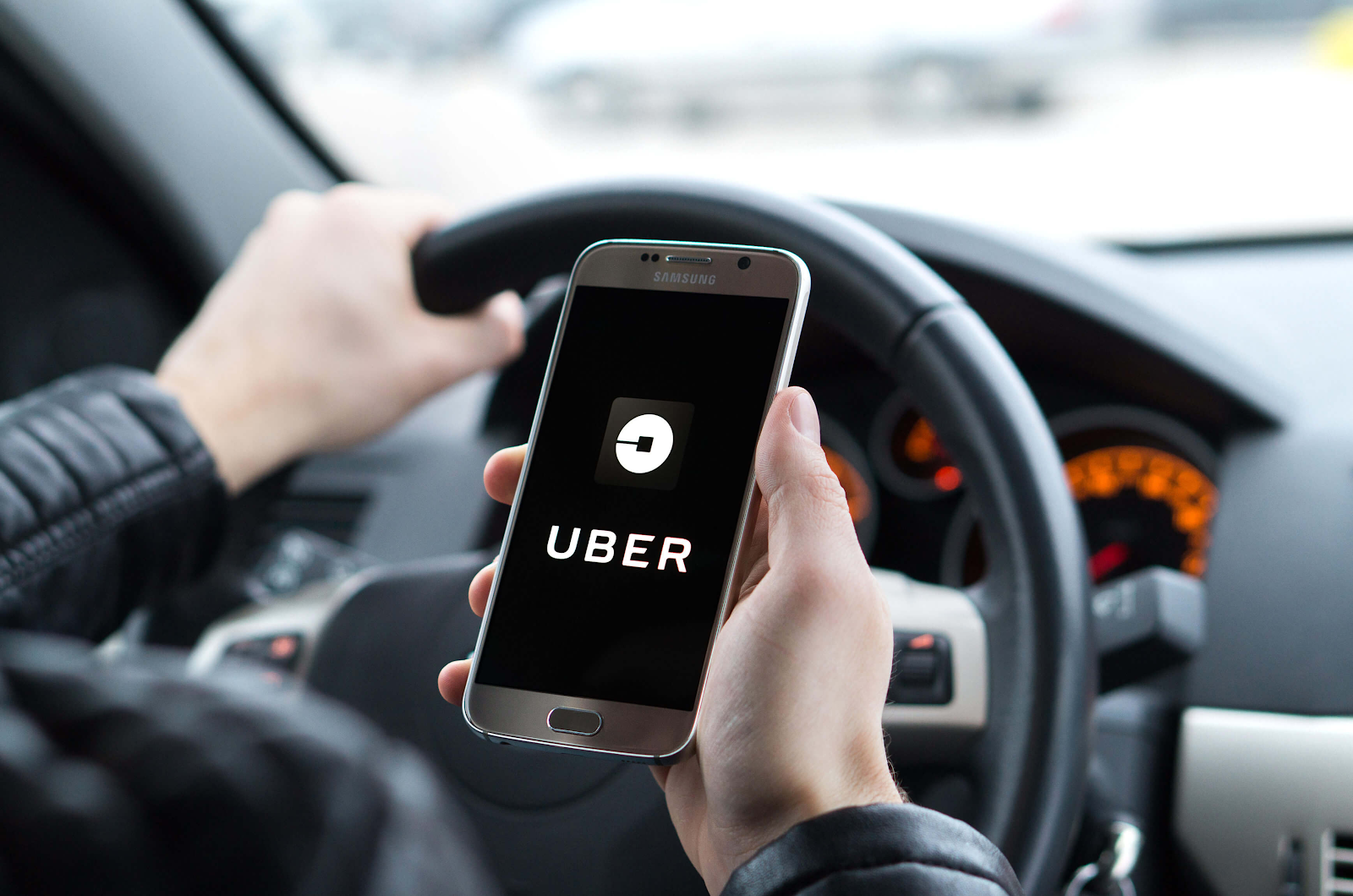 History of AB5 Since the Beginning of 2019

First: Uber and Lyft said they would ignore the law all together since it did not apply to them, as they consider themselves a technology platform. In Uber’s case, this includes rideshare, e-bikes, scooters, freight, food delivery, helicopters etc. Uber and Lyft always contended that their drivers were independent contractors and not employees, but AB5 stopped this argument in its tracks.

Second: Uber and Lyft contend that changing the legal status of their drivers poses a fundamental threat to their businesses. Both companies stated they would spend $60 million on a ballot initiative that would essentially exempt them from the proposed law. After their announcement, DoorDash, the food delivery service, said it would contribute an additional $30 million.

Third: Two days before 2019 ended, Uber, Postmates and one driver for each service jointly filed a lawsuit in federal court in Los Angeles against the state of California and state Attorney General Xavier Beccera, asserting that AB5 is unconstitutional.

With the legal battle lines drawn, what do you think, will this be resolved in the court system? Will AB5 get repealed in one way or the other in 2020? Or is this just the beginning, with other states implementing their own versions of AB5?

This will be a long article with a lot of screenshots highlighted from the PAA. I urge all drivers to read at least the highlighted parts of the screenshots but would prefer that all drivers read it in its entirety to understand what is taking place in Uberland.

On the first page of the PAA, Uber clearly sets itself up as a Technology Platform and that Drivers and Passengers are in a P2P (Peer to Peer) relationship where the passenger is the driver’s customer and the driver is providing transportation services to the rider. 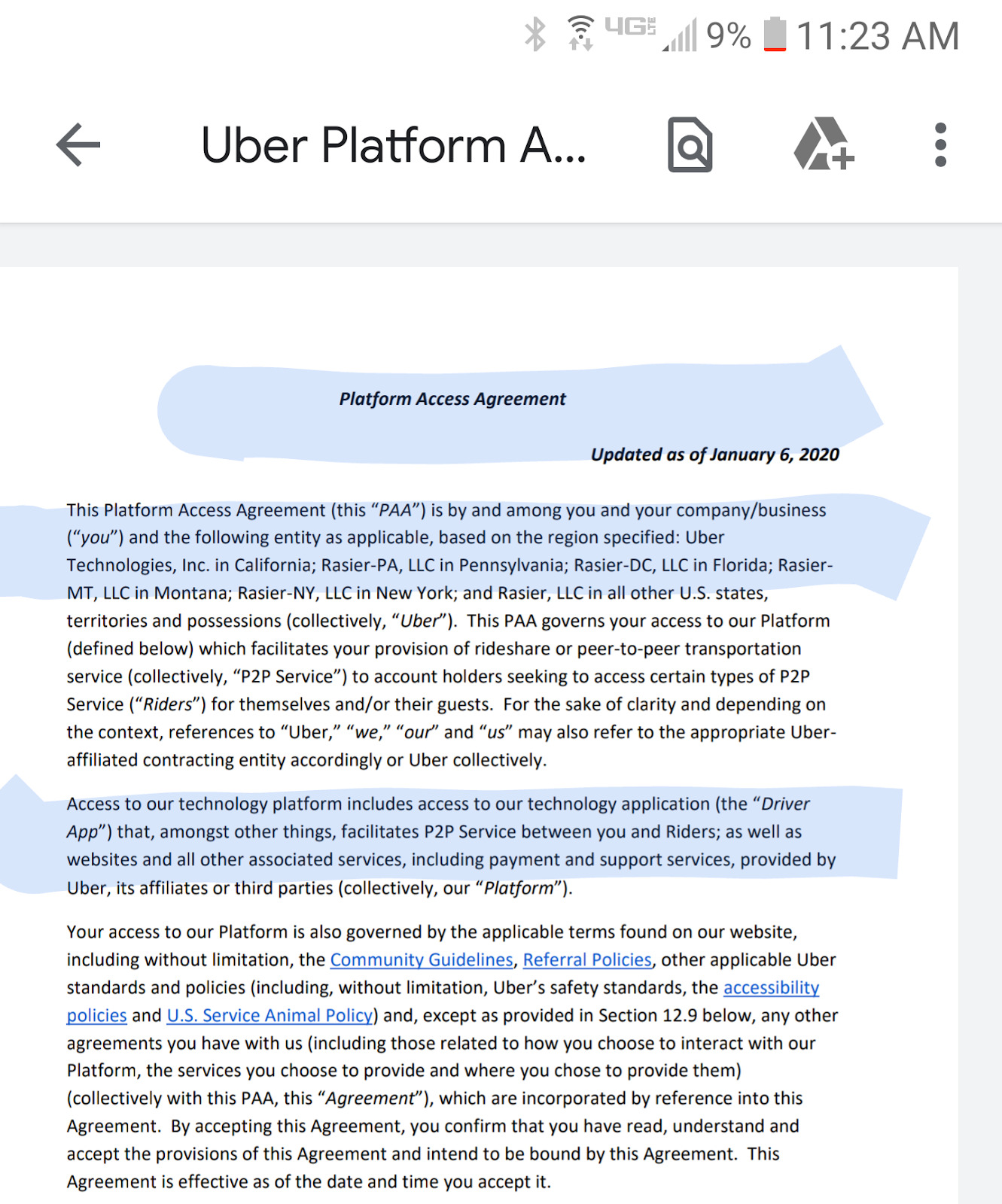 1.1 (Below) Drivers are now owners of independent businesses and they provide a service outside the business of Uber. Ring a bell? Take a look at the ABC test of AB5 above, clearly taking a shot at that! Drivers are not employees and the PAA is not an employment contract. Drivers are just accessing Uber’s technology platform. 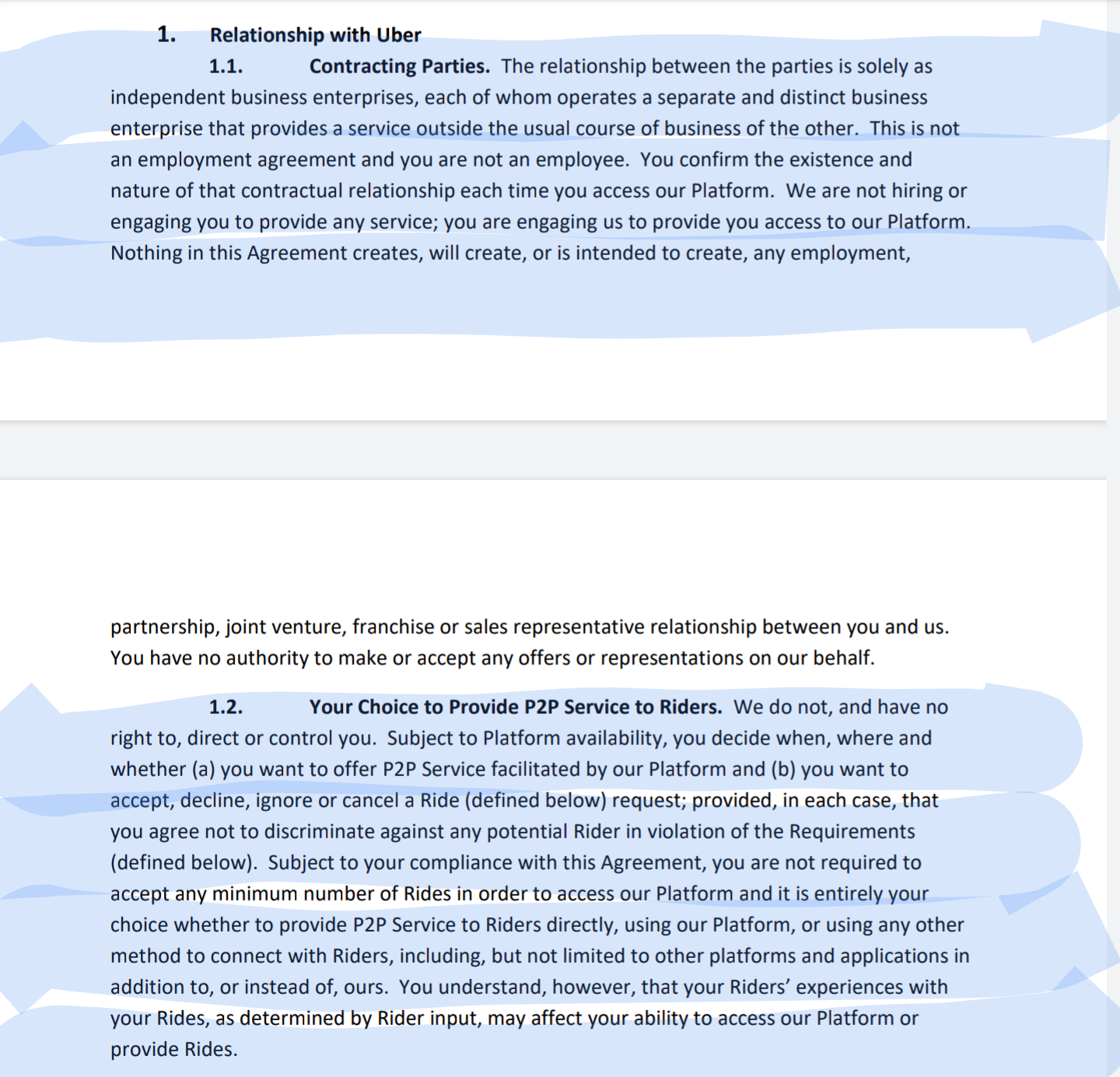 1.2 (Above) Uber does not have the right to direct or control the driver! This is also directly related to the ABC test of AB5 above. I truly don't buy this, other than turning the app on or off, Uber controls everything through algorithms, which driver gets what ride, what incentives they get for the week etc. In fact, as you will see on a different screenshot below, Uber admits to using algorithms. 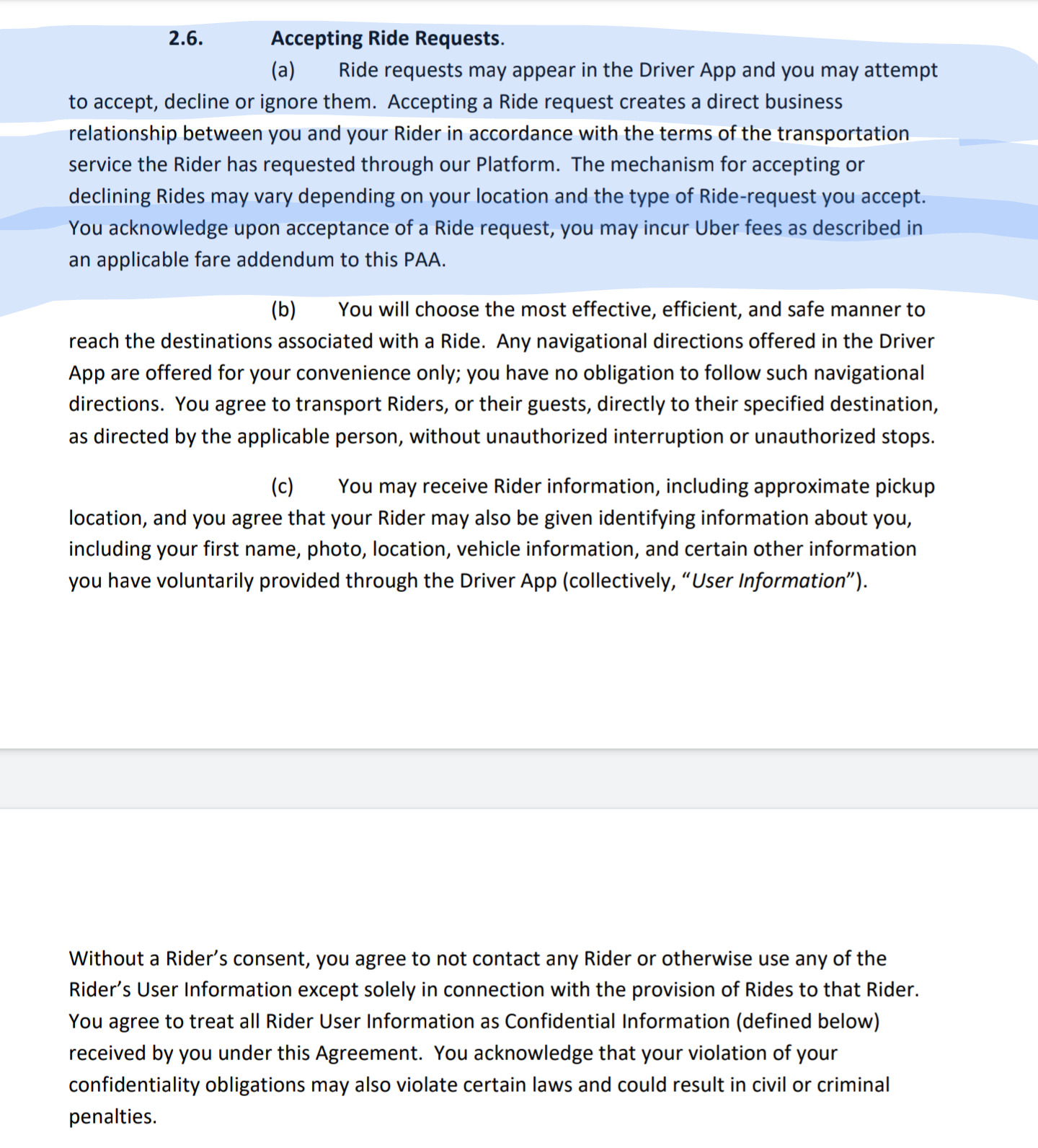 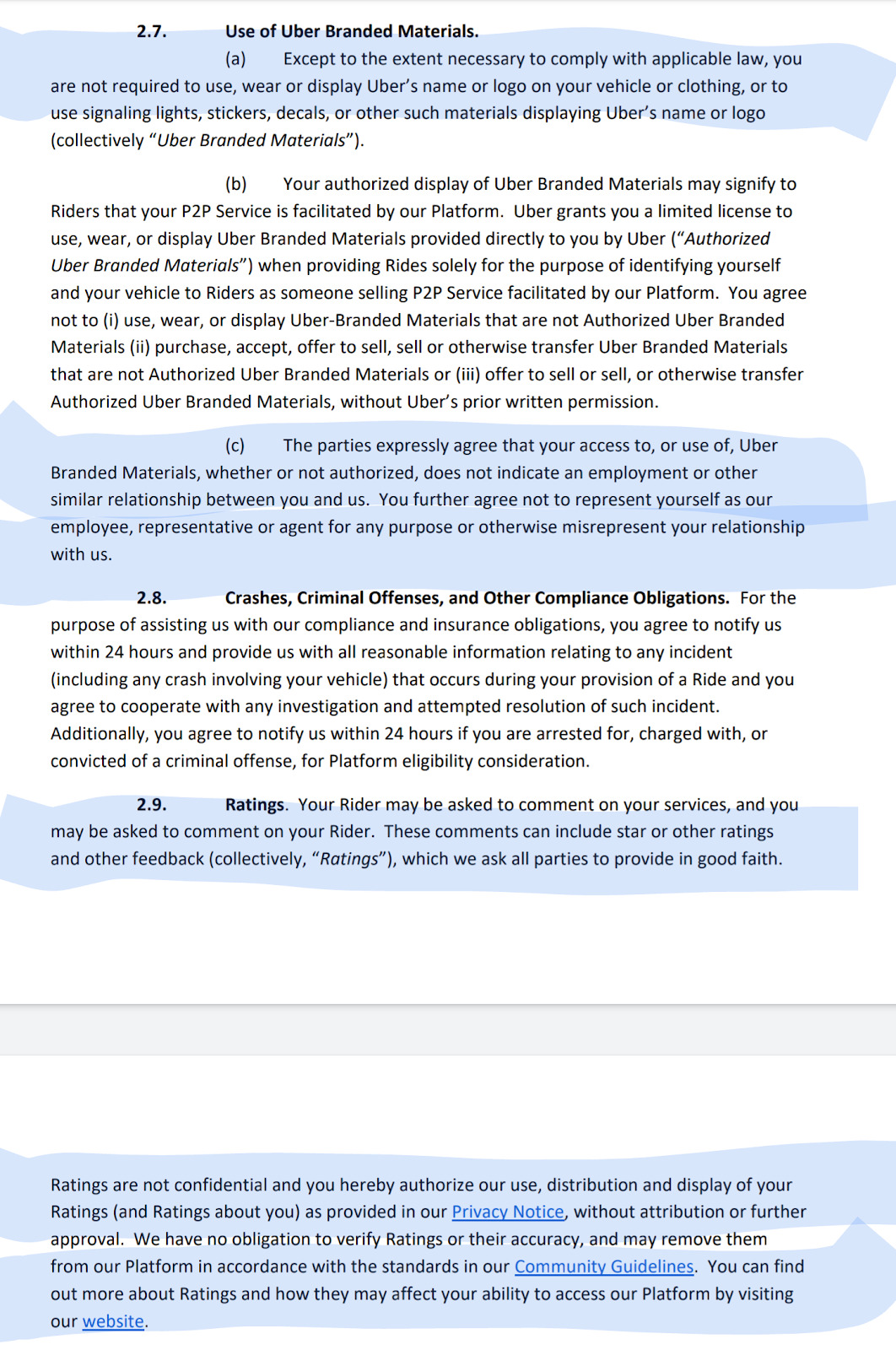 2.7 (Above) Uber reiterates that drivers are not employees, I guess I am not going to be wearing my Uber cap and shirt any time soon!

2.9 (Above) Ratings game continues, since we are not an employee of Uber why are drivers still subjected to their unfair rating system. If we are in a P2P business relationship with the passenger, why are Uber ratings still necessary and why can Uber deactivate (Fire) a driver if their rating drops below a certain point (4.60 usually)? Looks a lot like drivers are being treated like employees to me!

I had to underline everything regarding Insurance coverage. I probably read this page at least half a dozen times. What is most troubling for me is in Sections 3.3 and 3.4 (Below)! We will maintain Workers Comp Insurance? Since when?

In 3.4 (Below), Uber clearly states that they may reduce or cancel the policy that has been provided by them. Do we have Uber maintained insurance or not? Are we covered in case of an accident? How many drivers out there have insufficient coverage? They may be one accident away from a lifelong disaster. So far, when I accept a ride, I immediately take a look at the Waybill for that specific trip and take a screenshot of it. If there is no additional insurance provided by Uber (Progressive), I will cancel that ride.

Looks like the Marketplace Fee (Variable) Uber charges the passengers, used to be called the Service-Safety Fee, may not provide drivers with up to an additional million dollar liability insurance during the trip. Uber clearly states that they may cancel that insurance at their discretion without notice. It is not worth driving these days for the mileage rates we get paid but we could always count on the added Phase 1, 2 and 3 coverage provided by Uber, if that is taken away, I don't see why anyone would take the risk of driving strangers around! 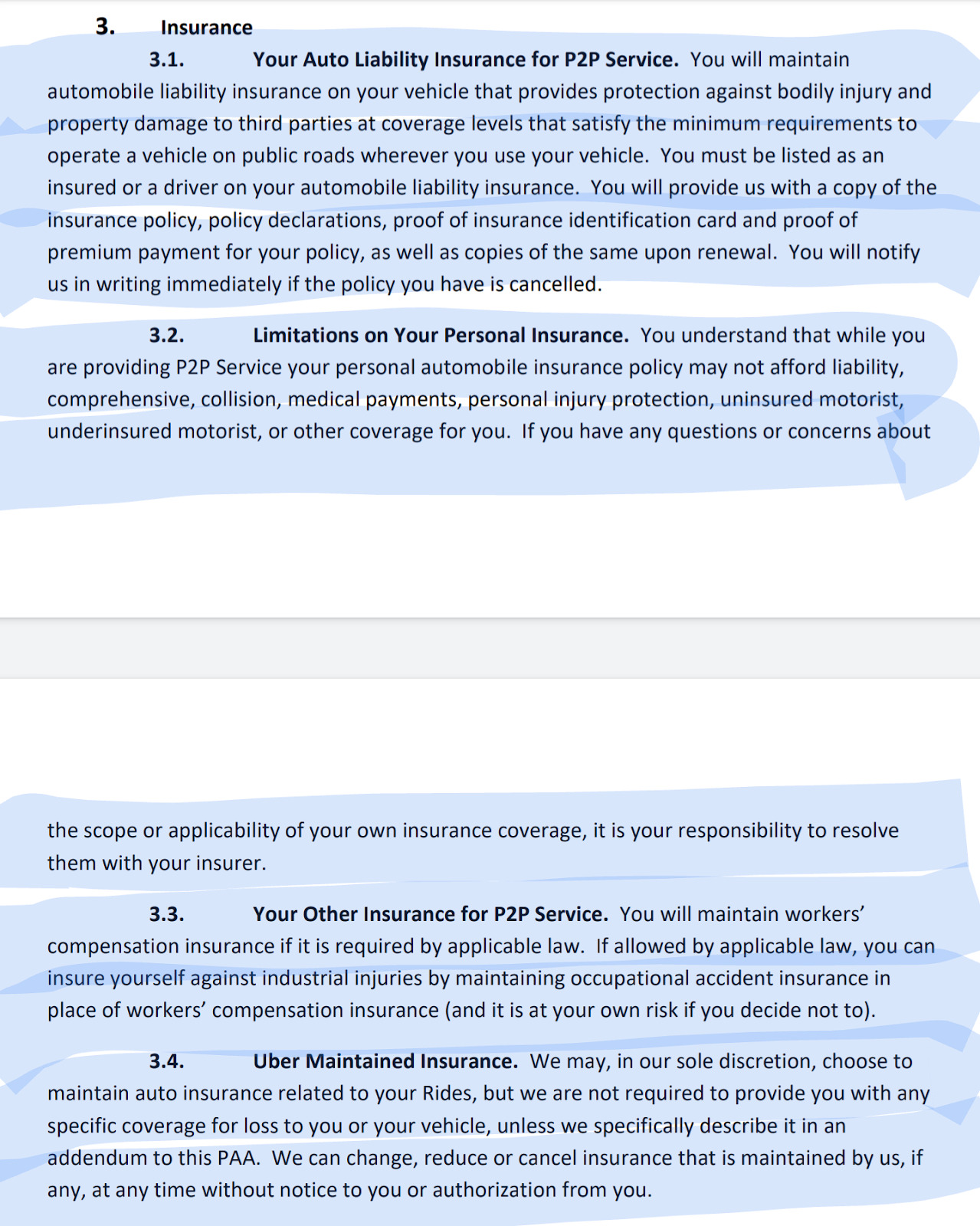 5.3 (Below) So the policy of unjust deactivations continues. We are all one bad ride away from getting booted off the platform. One fraudulent complaint away from deactivation, as it happened to my friend Jay with 8000 rides and a 4.95 rating, he was permanently deactivated a week before Christmas 2019!

What a shame, if AB5 needs to do anything, it has to bring these unfair and unjust deactivations to an end. Uber must stop being the judge, jury and executioner! 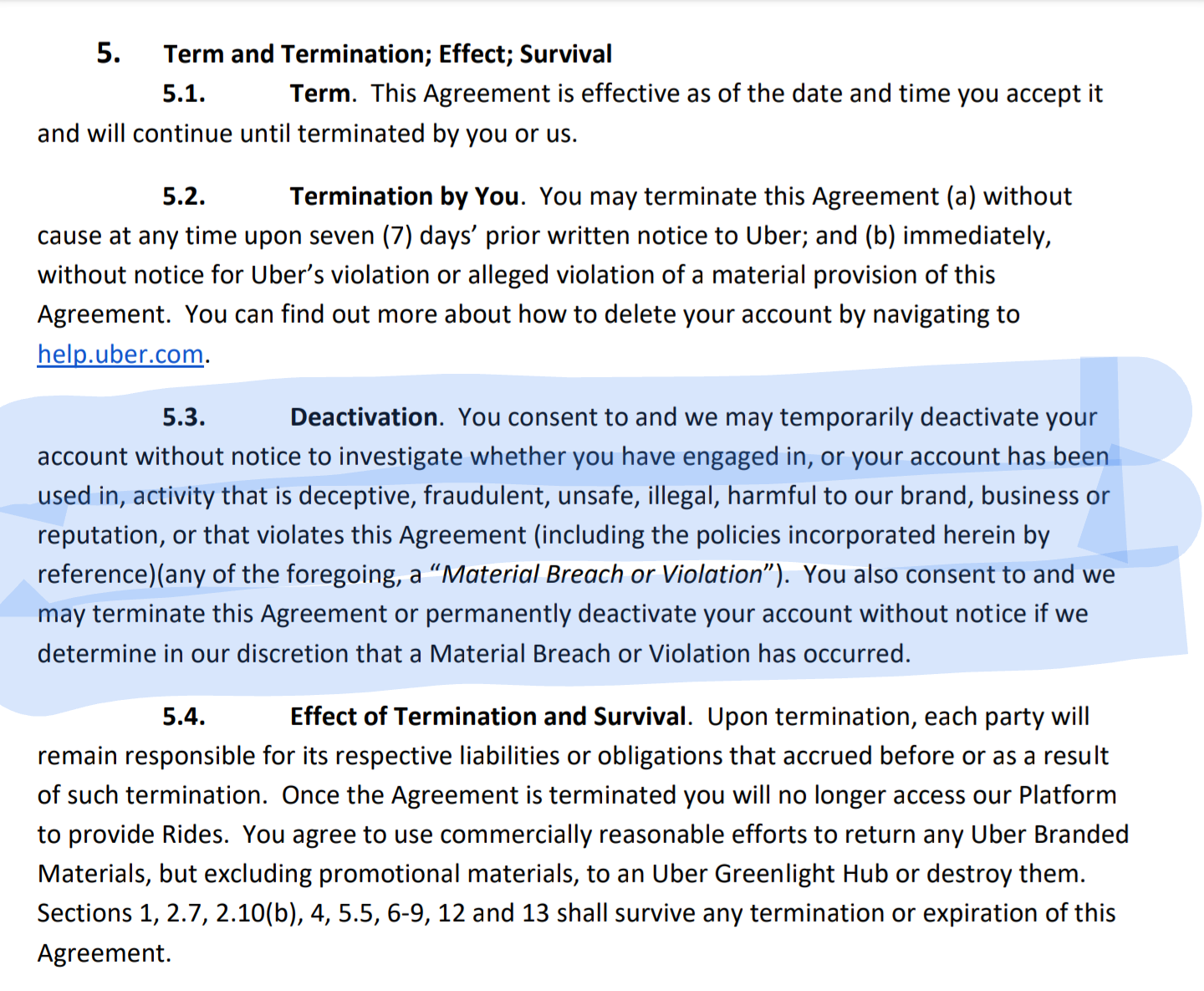 All risk is being shifted to the Driver and Passenger!

6.2 (Below) Uber is just providing leads to the driver, they do not guarantee the safety of the driver since the riders are not screened!

6.3 (Below) If a dispute arises between the driver and the rider, drivers are totally on the hook and vice versa!

6.4 (Below) Uber may use algorithms, completely contradictory to 1.2 above where it claims they don't have the right to control the driver. Now this one cracked me up! 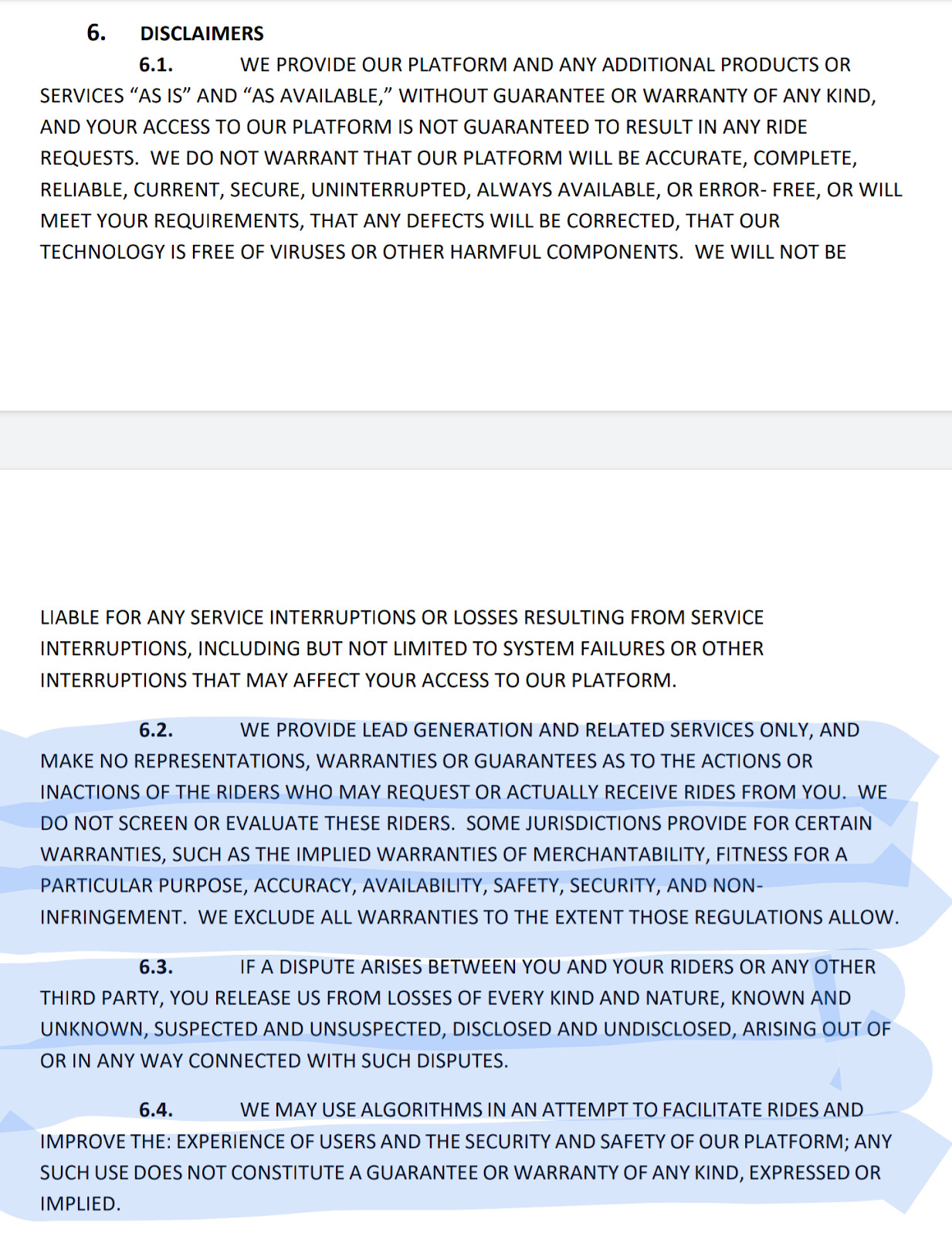 Uber is a payment collection agency for drivers! 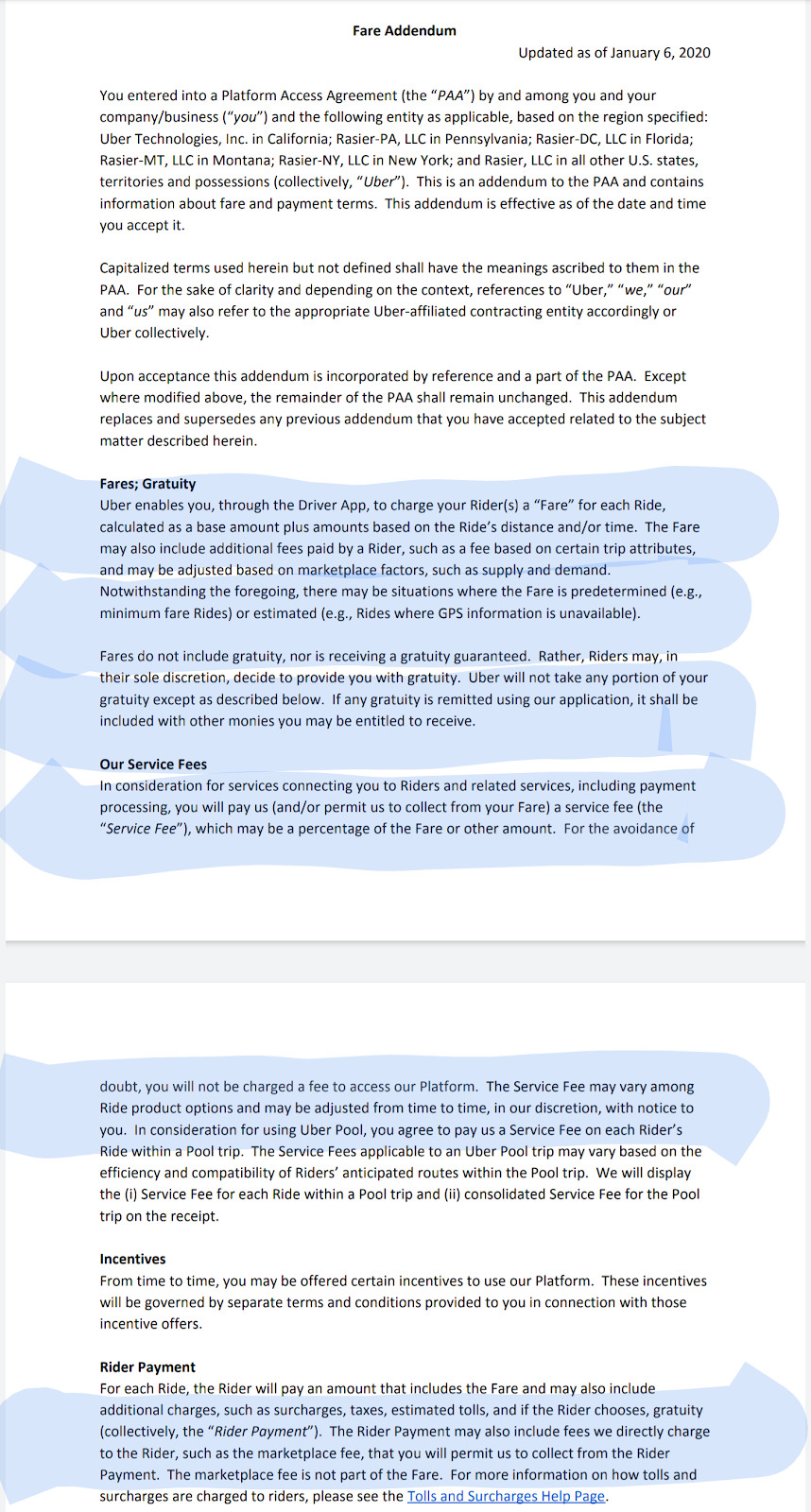 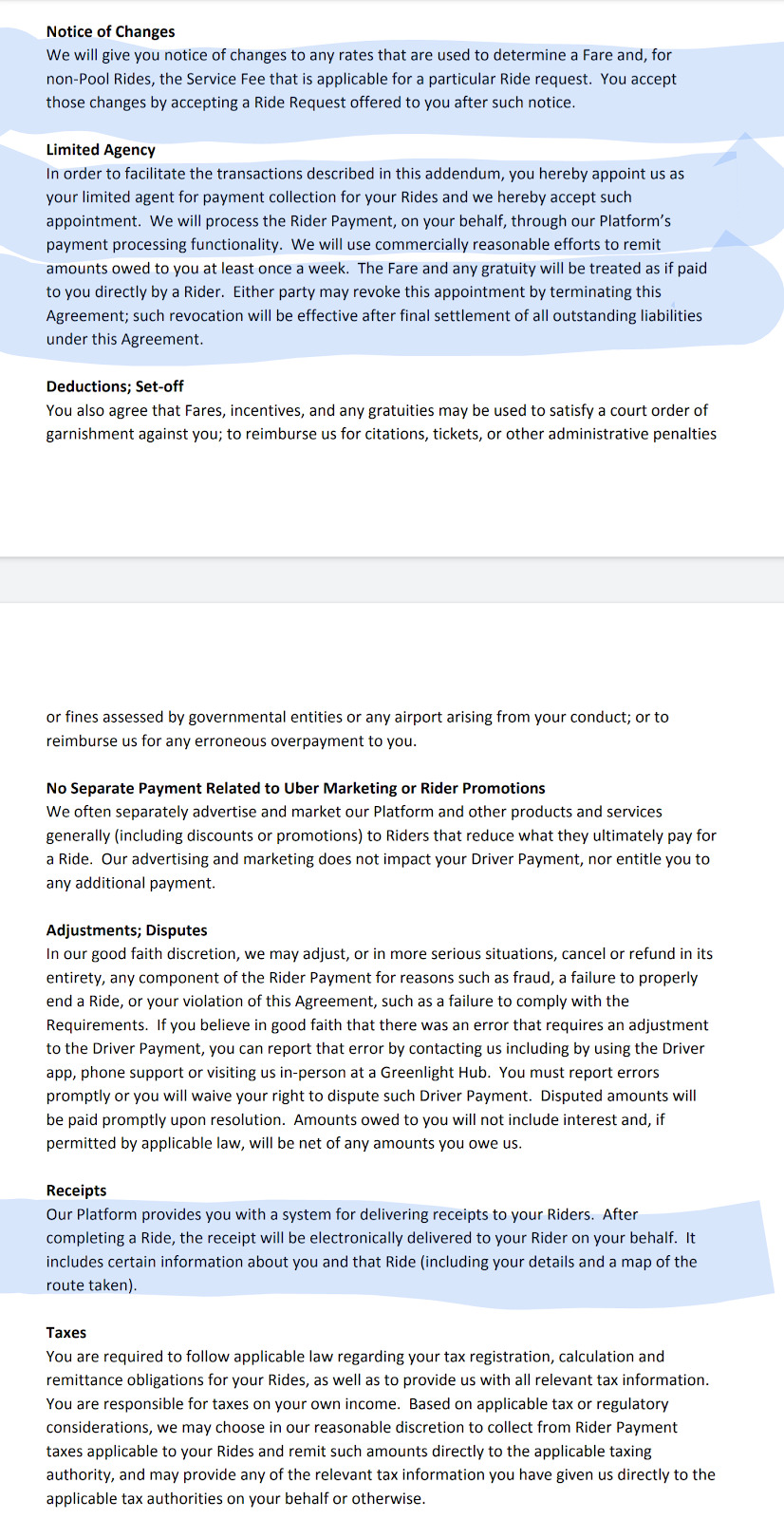 Drivers, take a good look at the highlighted sections above!

Fares, Gratuity: Since when are drivers enabled to charge a fare for the trip? Uber has set the mile/minute rates and continues to do so, not the driver. Things are changing I guess!

Our Service Fees: Uber allows us to use its technology platform for a fixed (20-28%) Service Fee. Now the driver gets to charge the rider by miles and minutes and Uber collects a Service Fee from the driver in order for them to access the technology platform. Uber has gotten rid of the upfront pricing in CA and now riders will see an average estimate of the cost for that specific trip.

Rider Payment: Riders will pay drivers a fare and pay Uber a marketplace fee (variable) outside the fare. It is mostly $3 dollars but Uber could charge a lot more, check your receipts!

Limited Agency: Uber is now our agent; it is a payment processor for the Driver. The fare and gratuity is considered direct payment to the driver from the rider!

Receipt: Receipt will be electronically sent to the rider on the driver’s behalf.

Finally, some clear language about transporting unaccompanied minors (Below). I hope Uber drivers will keep this in mind and reject all of these trips, a few dollars received from a trip is not worth a lifetime of grief in case something goes wrong. All drivers should have a copy of this screenshot (below) on their phones in order to avoid unnecessary arguments with underaged passengers or their parents. 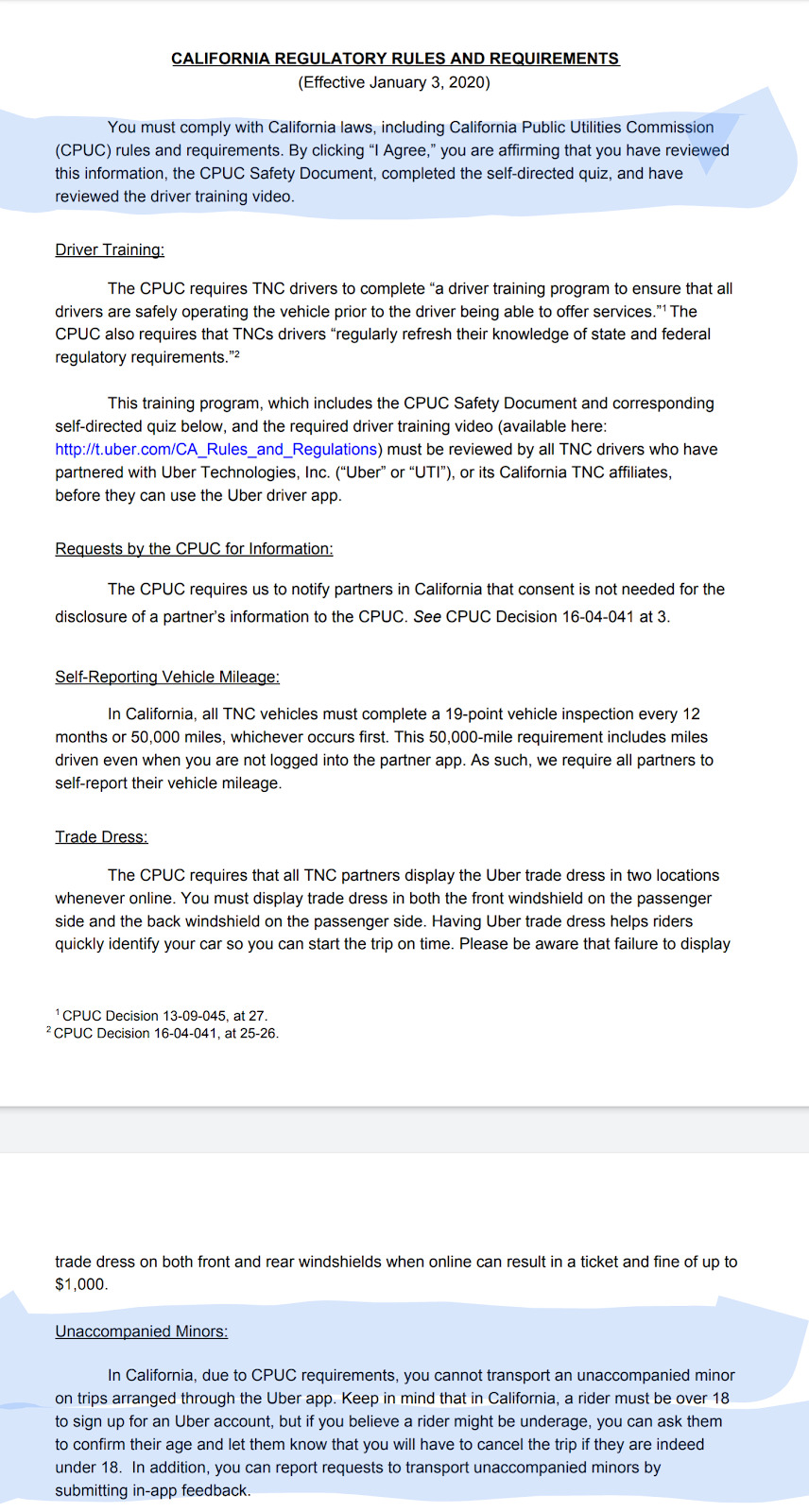 My take on the new PAA

Uber is in a giant push to defeat AB5 not only legally, but they’re working very hard to change public opinion. If fares go up or most short trips are rejected due to these changes in CA, Uber will use this evidence against the drivers and AB5! Uber and Lyft are also feverishly collecting signatures for a petition to qualify a ballot measure for the upcoming 2020 elections to repeal AB5. This is an ad on Craigslist I saw the other day; it looks like a high payout for signature collectors! They may end up making more than drivers. 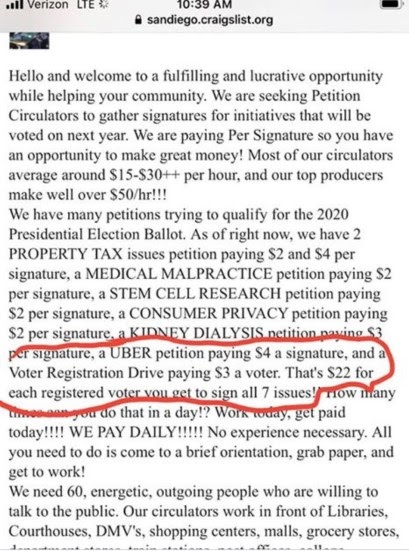 I think Uber is being smart here. Uber is hedging their bets by throwing a bone to the drivers in case everything else fails as far as their legal challenge is concerned. They are separating themselves from Lyft, at least for now. Will Lyft follow the big brother and bring back Prime Time, or show destination to its drivers? It doesn't look like it so far. If Uber, Lyft, Doordash and Postmates are able to tie up AB5 in courts or repeal the law in its entirety, I bet Uber will take back all the seemingly positive changes for CA drivers.

Do all these changes in the PAA make us independent contractors? Uber legal team definitely must think so!