I have been driving for Uber & Lyft for almost four years. I have definitely reduced my hours on both platforms drastically since both companies are in a race to the bottom with their cuts in rates paid to the driver. One of the main reasons I still drive is to keep up with the changes on both driver apps, to make sure that what I am writing is comprehensive and from a first hand experience. Since a lot of mainstream media articles happen to be cut and paste pieces and don't reflect what the driver truly goes through, as a driver’s advocate, I want what I write to be clear and concise.

I can't think of two other companies that have lower approval and satisfaction ratings by their workers than Uber and Lyft? Since the turnover rate for both outfits are astronomical, as per a CNBC article 96% of drivers quit in less than a year. What are the reasons for this massive turnover rate? One of the main reasons is transparency! We drive our own cars to pieces to make money as a side gig or on a part/full time basis. We, as IC (Independent Contractor) drivers need to know what we're going to make on each ride in order to learn from our experiences. The only way to do so is through the driver app and trust what Uber and Lyft discloses via the detailed passenger receipt with a full breakdown of the fare.

As seen below, Uber still keeps up with their end of the bargain by informing the driver with a detailed breakdown of what the passenger paid for the specific ride. 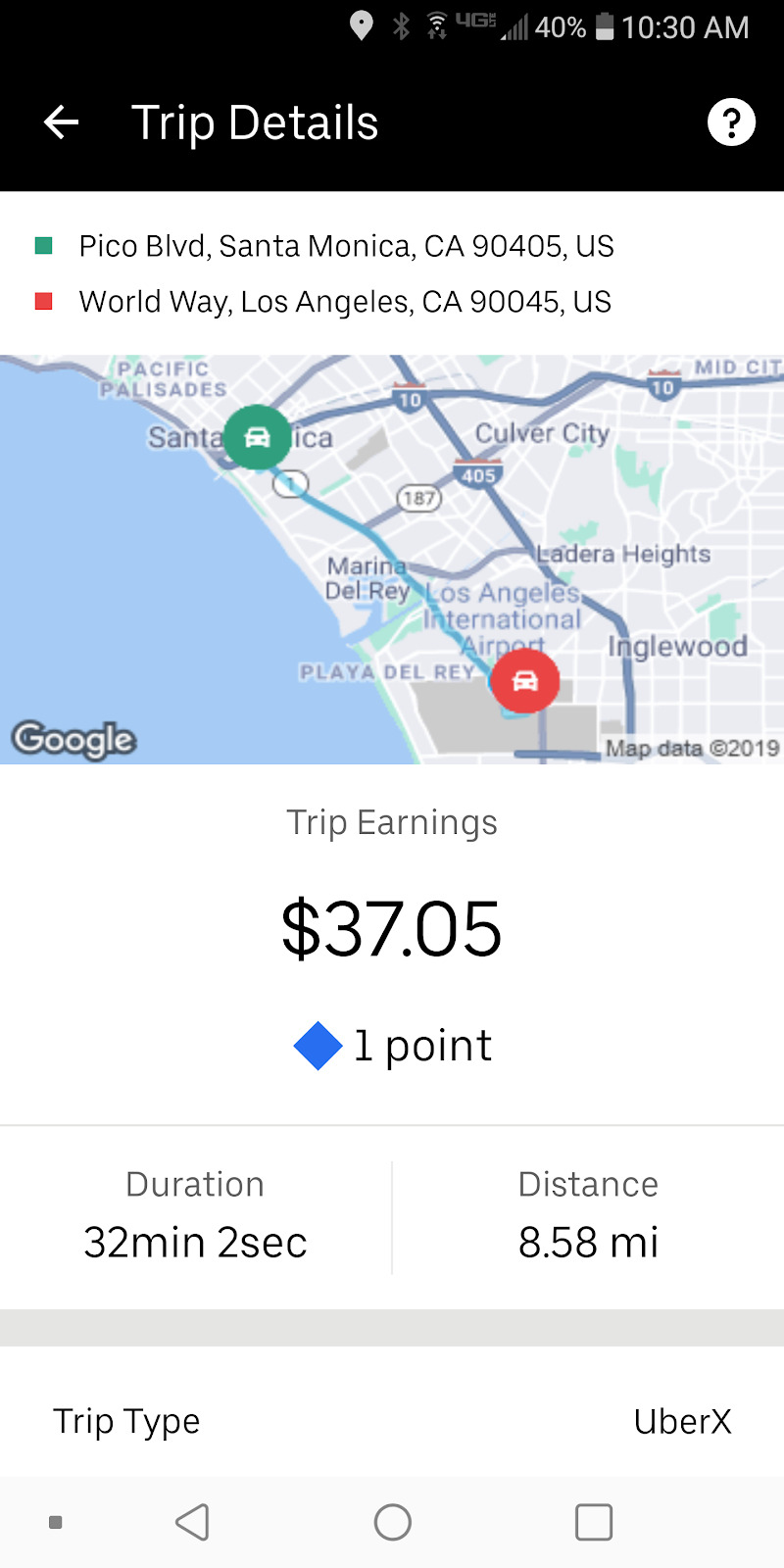 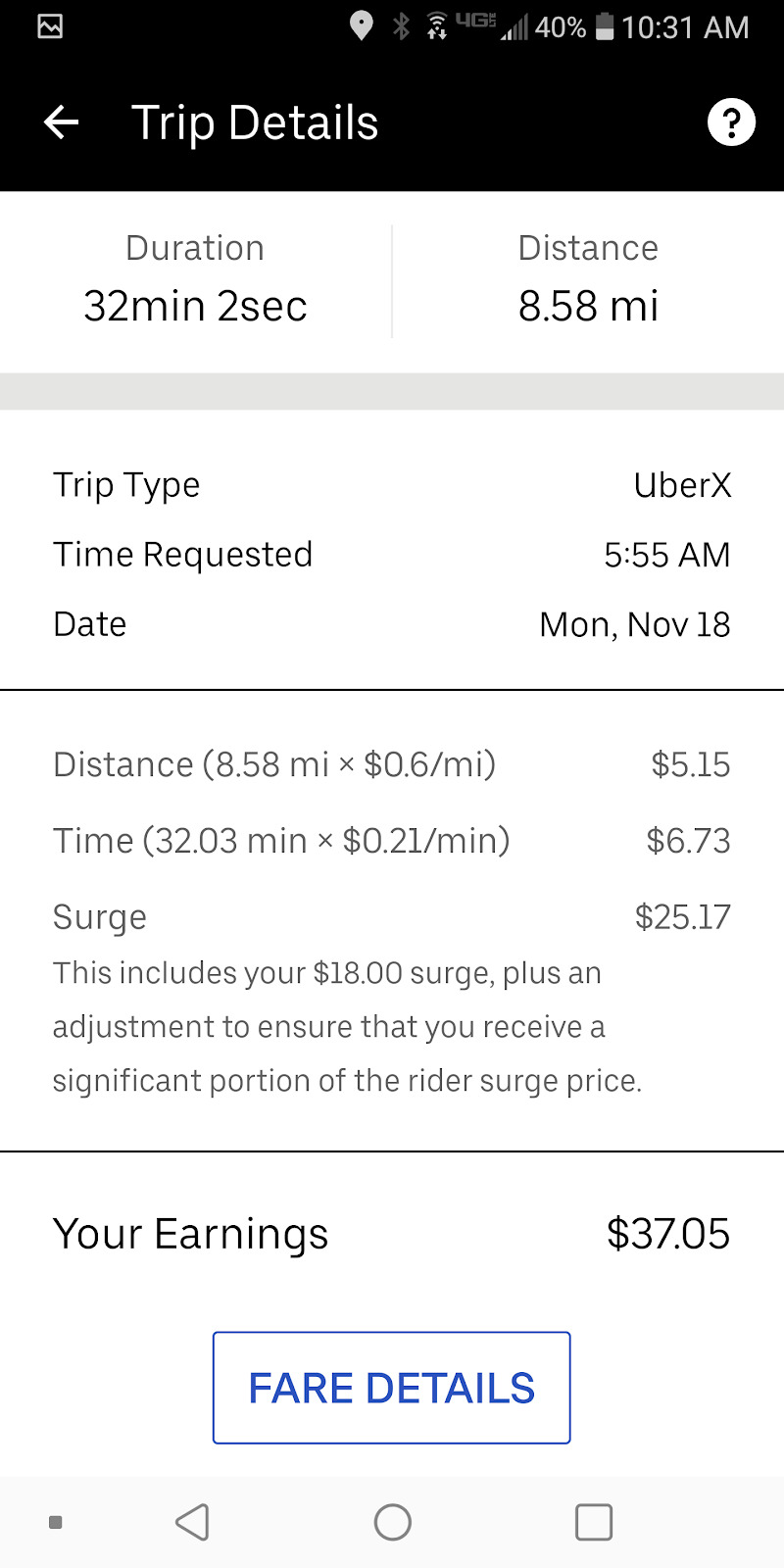 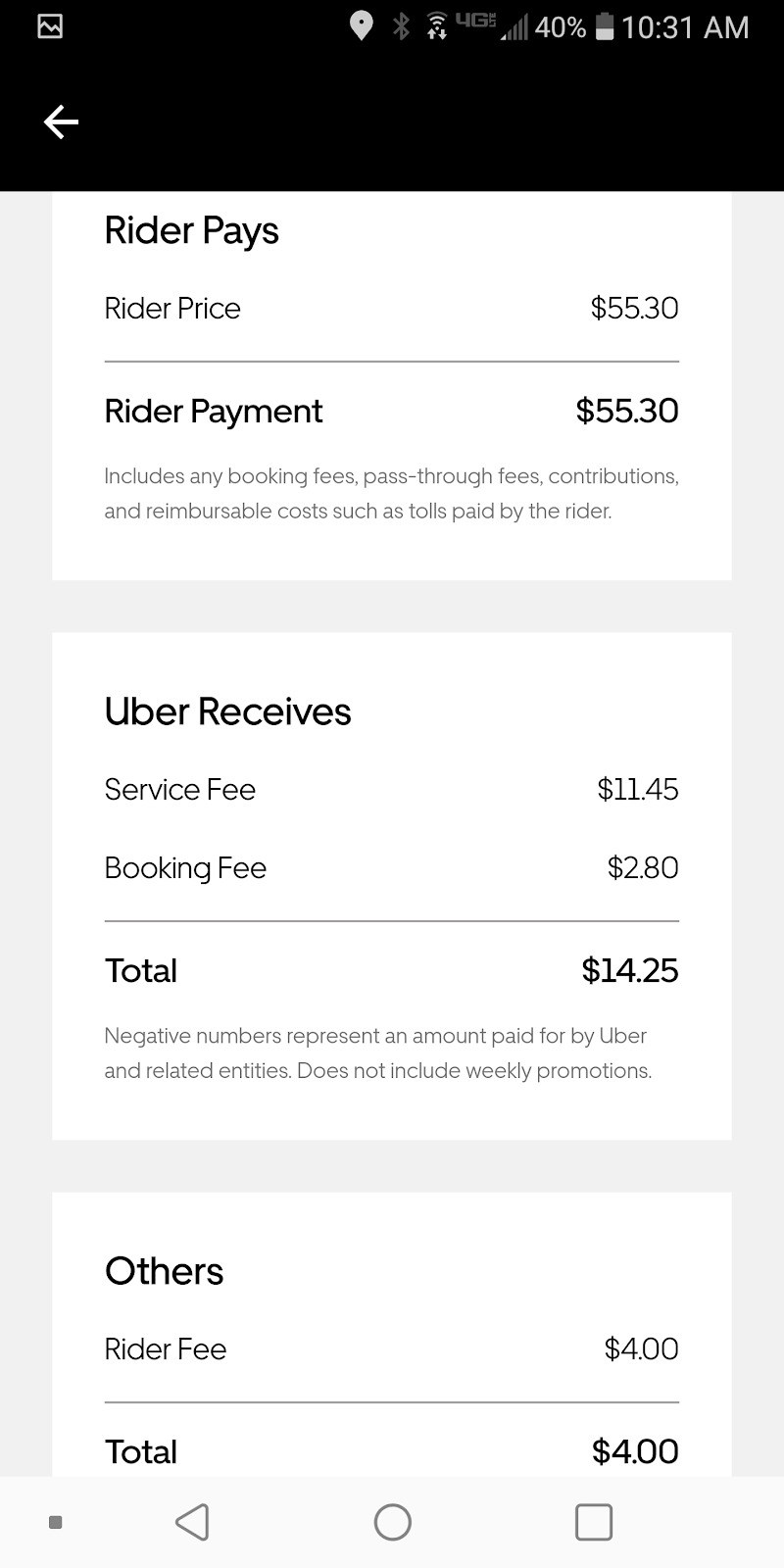 What is new on the Lyft Driver Dashboard?

However, Lyft recently made a change to its driver app that removes drivers’ ability to see what passengers pay for individual rides. The ride-hailing firm said the change was implemented with the aim of boosting the transparency of the driver earnings statement. I totally disagree! Although there are parts of the new statement that I like, this is not more transparent than what we had before. If anything it makes me more suspicious why Lyft took away our ability to see the fare details.

“We want to make sure there’s never any confusion about how much you earn throughout your week,” Lyft said in their blog post. “That’s why we’ve developed a clearer, more comprehensive view of your pay details. You’ll soon see a weekly pay statement in your Driver Dashboard.”

The amount earned isn’t impacted by the change, and drivers can still access their earnings breakdown for previous rides but without what the passenger paid for that specific ride in order for us to figure out the Lyft percentage hold. However, drivers will only see an aggregated look of their earnings for all passengers transported on a weekly basis after the change is phased in nationwide. Lyft says the new view “makes it easier to see your net earnings from week to week,” as drivers won’t have to calculate what they made in a given week. While intended to increase transparency, some have raised questions about what Lyft could potentially be hiding through its redesign of drivers’ weekly pay statements. As far as I am concerned, this is typical Lyft, give something to the driver and take away one of the most important pieces of information that was very useful to them. 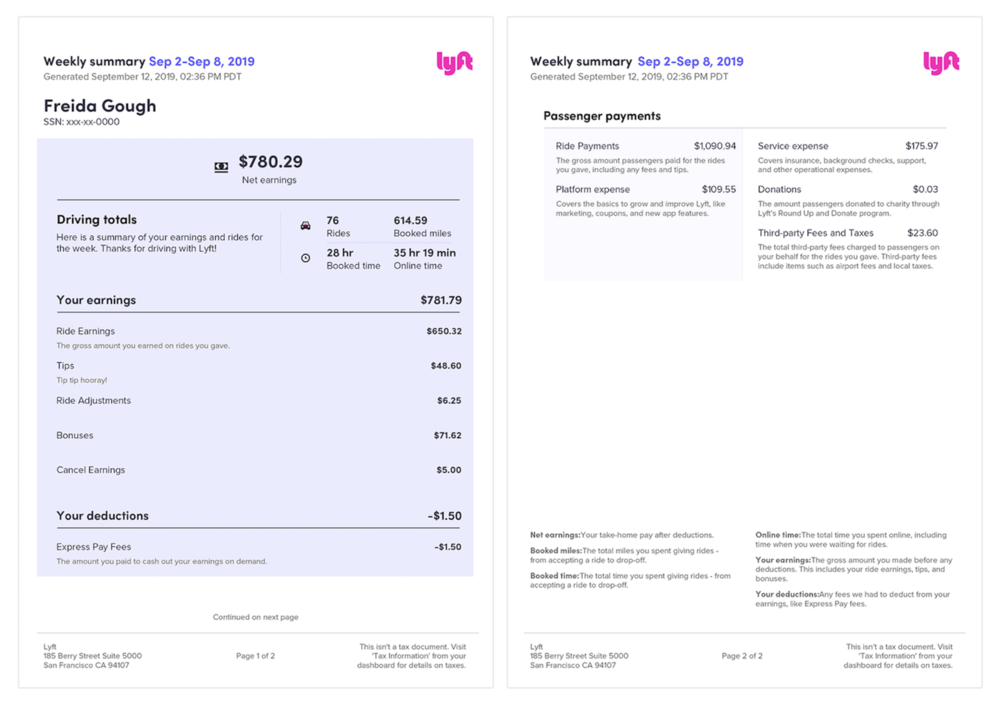 On the first page of the new statement you'll see the following details.

Net Earnings: This item should be pretty self explanatory, however, this dollar amount is the Net Earnings you will receive from Lyft. For the driver’s purpose though, this is actually your gross earnings since this is before all the expenses such as gas, car payments, insurance, depreciation, maintenance, etc. I would have preferred this headline to have a disclaimer.

Driving Totals: Rides. This line item is very clear, it consists of all the rides the driver has given for the week. Booked miles are all the miles driven from the time of accepting the request to the end of the ride, not including dead miles for taking advantage of PPZ (Personal Power Zones) or returning home at the end of the shift. You should track your miles with a free app like Stride Tax to make sure you can deduct all the business miles you drive. Booked hours is the total time spent from the moment a diver accepts the ride to the time a driver ends the ride. Online Hours is the total amount of time a driver spends logged on to the Lyft platform including waiting for ride requests.

The rest of the new statement’s first page is self explanatory. It includes all the bonuses, tips, cancellation earnings and the driver’s deductions due to rentals and fare adjustments.

On the second page of the new statement, you'll see the following details.

The nice thing about the new earnings screen and this page in particular is that you can add up the platform expense and service expenses 109.55+175.97 and use that to figure out what Lyft’s effective commission for the week is.

In this fictitious Lyft example, the formula for calculation would be: (Platform expense + service expense)/(Ride payments – Donations – Third party fees and taxes)

Note: this is a fictitious example since over the past six months I have found Lyft’s take much higher in the 30%-40% range, especially after the introduction of Lyft PPZ (Personal Power Zones)

Individual ride breakdown will look as the following screenshot, a lot less transparent and lacking details such as exact miles and minutes driven for the specific trip. I personally don’t like the fact that Lyft, on the one hand, decided to simplify and add more information to the driver Dashboard and on the other hand, took away the details of each ride from the driver. It seems like they are trying to hide something – maybe the 40%-60% commissions that it takes on certain trips? I could understand why the passenger receipt would not be individually revealed, since all the rides are aggregated in the new weekly statement. Is it about to relieve the driver’s angst about the take rate (RPB - Revenue Per Booking) of Lyft? I would have preferred to keep everything the same but add the new comprehensive statement to Lyft’s arsenal. 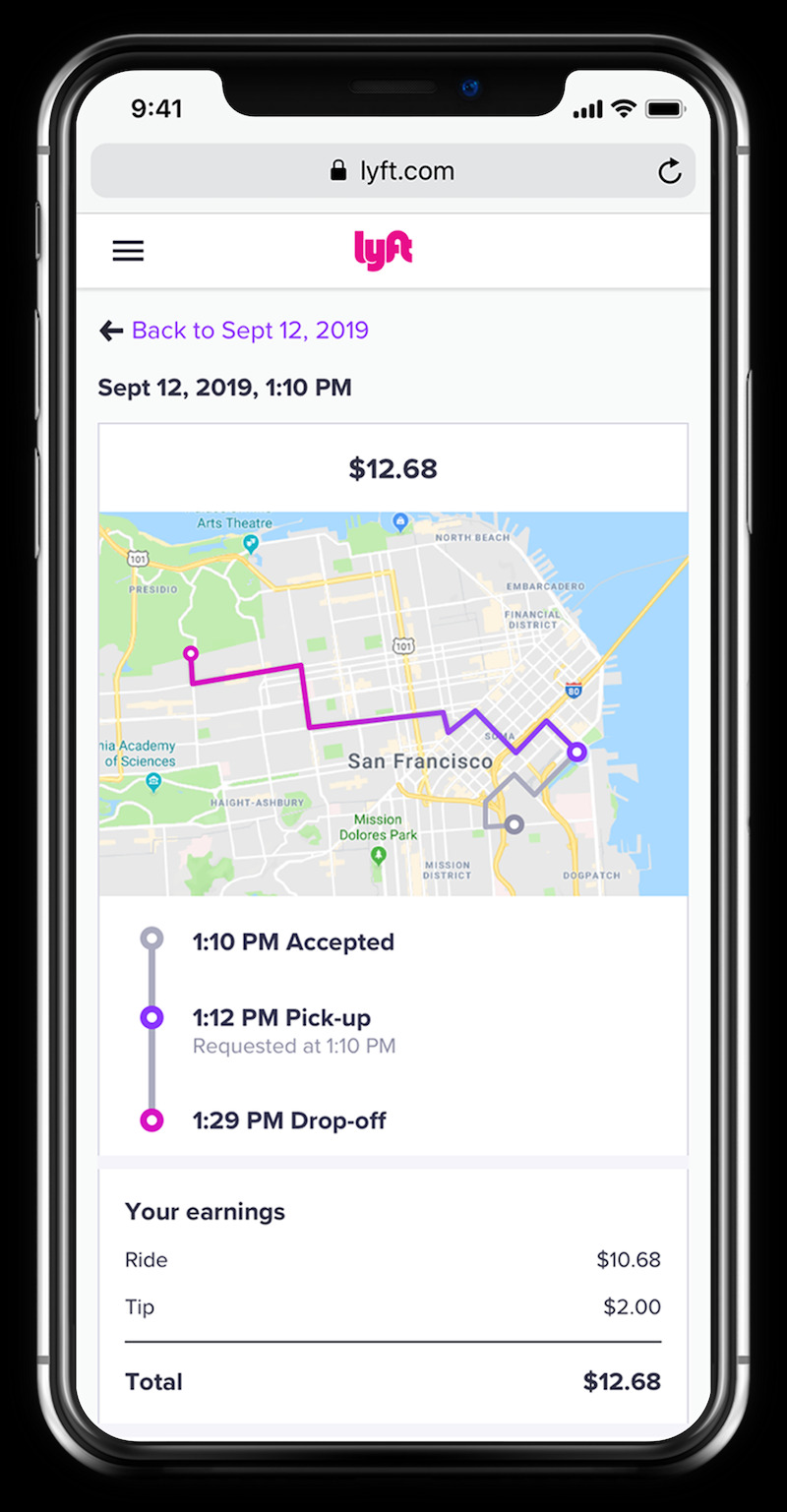 My Take on the changes:

My takeaway from these changes that took place in October 2019 are mixed to negative. Lyft rolled out these changes with a mandatory app update for its drivers. After the installation of the update, drivers noticed they could no longer see how much the rider paid for any given trip. It’s yet another move that potentially undercuts Lyft’s (and Uber’s) legal logic that classifies drivers as independent contractors instead of employees. As I have interviewed many drivers since the change, the number in support of these changes is miniscule. I think it is all about control of the driver, from the algorithm deciding who gets what ride to the total separation of what the passenger pays to what the drivers receives.

At least some drivers I spoke to say not being able to see what the rider paid will affect their revenue, driving strategies or at least the thoroughness with which they can analyze the profitability of each ride. One veteran driver told me that he used to look at every fare to see if the rider paid way more than what he received. If that was the case, he would contact Lyft support and pursue fare adjustments. Another driver said the change probably won’t impact him on a day-to-day basis, but it’s more a matter of curiosity and knowledge of the business he’s engaged in. He said that knowing is better than not knowing.

The new detailed driver earnings statement on the Lyft driver Dashboard is a definite plus for drivers who treat their driving as a small business and would like to keep close tabs on their expenses. I have frequently asked drivers on my brakes every time I decide to drive if they treat their driving as as small business. To my dismay, I have come up with the conclusion that a majority of drivers have a daily dollar goal in mind, they just turn the app on and accept every ride Lyft throws their way instead of deploying strategies that would be beneficial to their bottom line. Maybe this will help them be more proactive in understanding and taking an interest in their financials.

Ultimately, I think Lyft has figured out how upset the drivers were getting by checking the rider receipt after each individual ride and discovering the exorbitant amounts Lyft was taking as a percentage of the fare. Since a majority of drivers use both platforms to make money, in a moment of anger and frustration, they could decide to switch to Uber and create problems for the Lyft platform in the form of longer passenger ETAs, turning down requests or cancelling rides!