The Top Differences between Driving for Uber vs. Lyft

Choosing between driving for Uber or Lyft? While the two are very similar, here are the main differences between the two apps (Part 1). Follow up next week for Part 2 of this article.

I have been a driver for Uber and Lyft for about four years with over 5000 rides between the two companies, a majority of those rides, up to 80%, have been completed on the Uber platform. Them two apps may have been quite different when I first started, from the pay structure to bonuses to surge and prime time they offered, but these days it is really difficult to distinguish the difference between the two apps. But I still have my preferences when it comes to both driver apps and I will be sharing them with you.

Over the years, I’ve come to learn that from a profit standpoint, Lyft offers no competitive edge compared to driving for Uber in 2019. Lyft is often credited and marketed as being the “driver friendly” or so called “kindler and gentler” rideshare company. That may have been the case a few years ago but things are much different in 2019 and right now Uber is clearly ahead of Lyft in every way that matters to me as a driver. That’s saying a lot since driving for Uber isn’t exactly a fabulous job.

For better or worse, Uber and Lyft are always innovating and adding (or removing) features in the driver app. In this case, both Uber and Lyft have incorporated features that have made it much easier for a driver to manage his or her workload. But one thing is for certain, over the past four years that I have been driving, both companies are still trying to figure out how to run a profitable business (currently, their combined losses are close to $15 billion!) and driver pay has been their primary target as far a cost reduction. In four years, my gross earnings have declined over 40%.

About a month ago, Uber introduced their flat rate surge pay structure and in April of 2019 Lyft introduced PPZ (Personal Power Zones), something very similar to Uber’s flat rate surge system. From a driver's perspective, Uber’s flat rate surge is superior in every way to Lyft’s Personal Power Zones (PPZ). Both companies offer a few extra dollars per ride as a bonus on the next ride request the driver will receive when they enter the zone. The flat rate surge by Uber has replaced the old surge multiplier and PPZ has replaced the old Prime Time Lyft used to offer. However, Uber does this with large surge “clouds” while Lyft uses comparatively tiny and rare pink and purple boxes that appear as tiny squares while driving.

Here’s a screenshot taken from both apps at the same time: 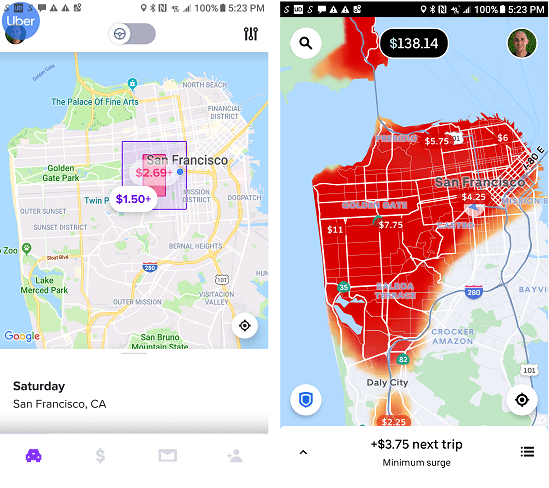 As you can see above, Uber’s surge occurs as a large “cloud” vs. Lyft’s tiny Personal Power Zones that seem to arbitrarily show up when the Lyft algorithm decides to do so. Uber will also adjust your compensation for some long distance surge fares by sharing some of what the passenger paid as a surge multiplier on the fare, it could amount to as high as double or triple that of the original surge bonus. Lyft does this as well, but not as often it seems. I also don’t have to drive nearly as far to get into Uber’s surge cloud versus Lyft’s tiny-box Personal Power Zones. In the end, Uber’s surge usually pays more than Lyft’s Personal Power Zones.

Finally, Lyft’s Personal Power Zones are quite rare. Lyft’s “tiny box” Personal Power Zones generally do not show up until long after Uber begins to pay surge in a thick cloud blanketing most of the city. If I wanted to get into Lyft’s Personal Power Zone and give it chance to grow, I would have to pull over and stop inside the small pink square to maximize the PPZ bonus, which sometimes feels like the roulette wheel at a casino. On top of that, I would need to pass up on what Uber is already offering me by driving through Uber’s surge clouds just to get inside of Lyft’s tiny little boxes. Sacrificing precious time when Uber is usually offering more money in the first place. The result is that I rarely now give a Lyft ride when it’s busy. Instead, Lyft displays yellow “Demand” clouds. If I am driving for Lyft and I see a lot of dark yellow clouds it means it’s time for me to open the Uber app and start cashing in on their surge. 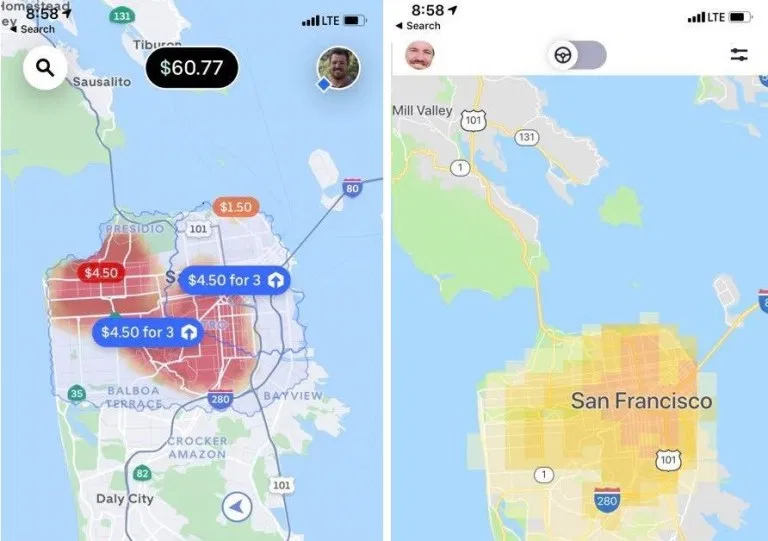 Uber (Pictured left) usually offers surge pay while Lyft (pictured right) displays demand clouds offering no extra pay. Instead of paying drivers more, Lyft displays yellow clouds showing where drivers are most likely to get requests. Basically, directing a lot of drivers to an area where they will receive ride requests but will have to endure base rates instead of sharing in the prime time that Lyft charges the passenger. Driver’s do not earn any extra money from giving rides within them.

As far as my personal experience in the city of Los Angeles, Uber’s surge arrives earlier, becomes more intense, and lasts far longer than Lyft’s Personal Power Zones, assuming they occur at all. Uber’s surge more accurately reflects a demand reality that manages to incentivize drivers in a way that makes their system more reliable. I will usually get a ride much faster, and much closer to where I am when driving for Uber; minimizing wasted time and distance.

When it comes to Surge Earnings, Uber is the clear winner.

Lyft is currently testing a new pay model on its drivers in 15 cities. The new pay model kicks in from the time a driver accepts a ride request all the way until the ride ends. Lyft is calling this rebalancing, however, it was not lost on the drivers that it came with a 50% cut in mile/minute rates. Lyft says drivers should still be earning about the same because now they get paid from when they accept a ride, however, most drivers who have experienced this beg to differ and have protested this change in places like Phoenix AZ, Minneapolis MN, and Las Vegas NV. My fear is that Lyft is likely to expand this program which in my opinion, would be another point against driving for Lyft. 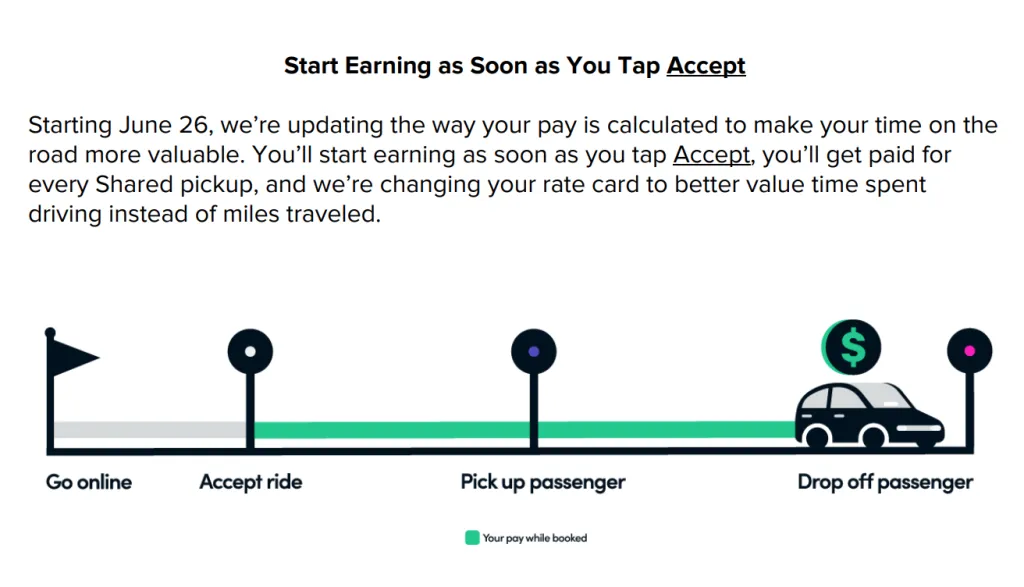 As a side note, while this is generally negative for Lyft drivers if could be beneficial for drivers in more rural markets. If you are in a market that requires you to drive a long way to make a pick up, then this new pay structure may actually benefit you as you will be paid for the travel time to your pickup, albeit less pay per mile/minute overall.

Pay Structure Winner = Uber (unless you live in a very rural market!)

So far we have 2 points for Uber and 0 points for Lyft. Check back next week for the final tally!