What is Carpooling? The difference between Carpools and Rideshares 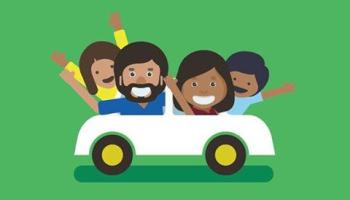 Ridesharing has become a popular concept in recent years, and companies like Uber and Lyft have changed how our world gets from point A to point B. Since the inception of ridesharing, there has been confusion over what constitutes as ridesharing vs carpooling. While the two are similar, there are a few fundamental differences between rideshares and carpools.

In its simplest form, the term Ridesharing is mainly used to denote community members giving rides to others, usually for a profit. The drivers of rideshare vehicles act similar to taxi cabs, giving paid rides in their own personal vehicle to members of the community. These drivers are not going to the same destination as their rider, they are simply giving a ride to the riders preferred destination and then continuing on to give another passenger a ride to a new location.

On the other hand, Carpooling is a term used to describe 2 or more people who have a similar commuting pattern and share a ride in an effort to reduce traffic congestion, costs, and pollution. With Carpooling, both the ride and the driver are heading to the final destination together. Carpools are not-for-profit rides, and typically the passengers only reimburse the driver for a portion of the cost of gas and car maintenance. Carpools also differ from rideshares in that many times they are organized for a single route and used on a daily basis, usually to and from work or school.

Here are some top applications that organize carpools.

Available in United States. *Only available for Companies and Universities

Lyft and Uber also offer services, Lyft Line and Uber Pool, that are a "mix" of both Carpooling and Ridesharing. Both of these services are still paid, on demand rides, with a for hire driver, however, Pool and Line rides will match riders together who are heading in a similar direction. By choosing Uber or Lyft's Carpool service, passengers save money by splitting the cost of the ride as well as help to reduce pollution and traffic. While riders will save money by splitting the cost of the Uber, these options are still more expensive than traditional carpools where passengers typically only pay their share of gas money.