Can Uber drivers really manipulate surge pricing as reported in the media?

“Surge Club!” Plenty of news lately that a handful of Uber drivers are manipulating the fares they receive by surge gaming at Reagan International in Virginia and Baltimore airports, costing the passengers to pay higher fares. Is it possible? Why are they doing it?

What is Surge/Prime Time? How does it get triggered?

The idea behind surge pricing is to adjust prices of rides to match driver supply to rider demand at any given time. During periods of excessive demand when there are many more rider requests than drivers, or when there aren't enough drivers on the road available to do pickups, Uber increases its normal fares. This accomplishes two tasks, first it gives the driver an incentive in higher payouts to turn their app on and make themselves available, second, it guarantees that passengers are not subject to long wait times for a car.

When prices are surging, you used to see a multiplier to the standard rates on your passenger app but Uber discontinued it in most cities and now they only notify the passenger on the app with a warning that the current prices may be higher than usual or that current prices are very high due to extreme demand. Is this more transparent than actually telling the passenger a multiplier so they would know exactly how much more they are about to pay over a base ride? Of course not but alas, this is Uber’s new system. 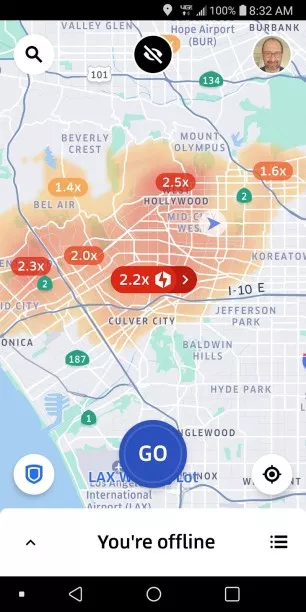 The screenshot to the left is what I see on my Uber driver application when surge pricing is triggered.

No one other than Uber knows how surge pricing gets triggered, according to their website it doesn't depend on how many riders actually request rides but it is strictly a decision their algorithm makes when a lot of potential riders turn their passenger app on and start pricing rides. They also have a lot of data about the demand history in a given part of town such as after concerts, sporting events, and at airports. So in anticipation of the upcoming demand they will put the surge on to attract drivers into the area in order to satisfy the future demand.

Could a handful of drivers create an artificial increase in surge?

Possibly, but, in this day of age where Uber algorithms pretty much decide on every part of the driver’s action, I highly doubt it. It could be possibly done at airports with a very small queue, certain sporting events or concerts, however masterminding such an effort will require massive coordination.

The drivers that claim to manipulate surge pricing at Reagan National Airport (aptly named, “Surge Club”), that were recently interviewed on the local ABC7 channel claim to have mastered this coordination. In my opinion, I believe these drivers were just looking for their 15 minutes of fame and I wouldn’t be surprised if Uber has already deactivated their driver profiles. After conducting their own investigation ABC7 declared that it has not found any evidence that it is happening at the D.C. area’s other two major airports, Dulles International Airport and Baltimore-Washington International Airport. That seems to be in part because of the lack of a centralized lot area where rideshare drivers have to wait like they do at Reagan National.

A few years ago, when the rates were higher and drivers were making more money, there was no need for such action. The drivers were happy driving and the passengers were happy about the service. Unfortunately, Uber & Lyft have cut the rates multiple times over the past few years. In Los Angeles Uber drivers get paid 60 cents a mile and 21 cents a minute for their work. These rates are about 50% less than a couple of years ago. So naturally, I don't blame the drivers for banding together to scrape a living.

Is it fraudulent as Uber claims it? Here’s their quote: “We have taken steps to address fraudulent behavior at airports and, under Uber’s Community Guidelines, engaging in this behavior may result in removal from the Uber platform. We are reviewing these allegations and will continue to prioritize efforts to prevent it from occurring,” It is really difficult for me to understand why Uber would be so upset about this, are they really admitting that a handful of drivers have the power to manipulate the platform? If so, what does that say about the reliability of the platform Uber and Lyft care so much about?

How to Avoid Surge pricing as a Passenger!

While surging on either app doesn't usually go that high, even paying 3x the amount you normally pay isn't feasible for most people. Here are a few ways to get around surge/prime time prices.

1. If you know you're going to need a ride during peak hours, schedule a ride in advance. Scheduled rides are not subject to surge although they may be higher than base fares.

2. Check the other app, if it is surging on Uber, Lyft may not be charging prime time, it is always a good idea to check both rideshare apps, you can also use RideGuru to compare pricing.

3. Walk a few blocks to get out of the high demand area.

4. Best solution, wait it out, surge is a temporary phenomenon, it doesn't last forever, it will subside and eventually when all the demand is met, it will disappear.

Uber and its opaque algorithms control how much drivers get paid and how frequently a surge will occur, and the company can manipulate its own rules as much as it wants, yet it gets mad when drivers, the company’s backbone, attempt to do the same on their own terms through a solidarity action. I am definitely not condoning such a strategy, I don’t think it could be effective over the long term. It gives a black eye to all the drivers.

However, Uber and Lyft should learn from this, as much as they think they hold all the cards, if it is proven that a handful of drivers could manipulate fares that easily, what could happen if hundreds of thousands of us came together?